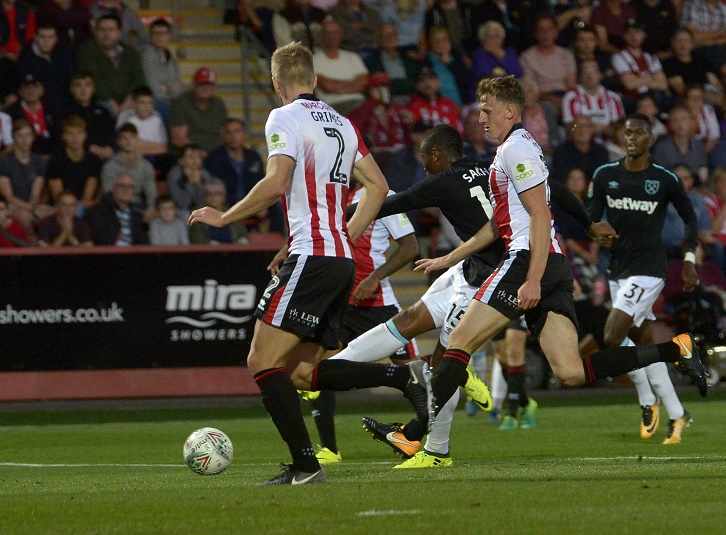 West Ham United safely negotiated their first hurdle of their Carabao Cup quest by overcoming Cheltenham Town 2-0 in the second round on Wednesday evening.

The Hammers rode a steady race in the town which hosts the annual National Hunt festival, hitting the front just before the halfway mark and keeping their noses comfortably in front in the final furlongs.

Diafra Sakho and Andre Ayew were the goalscorers at Whaddon Road, each netting within the space of three minutes just before half-time with identikit finishes into the bottom left-hand corner.

As you might have predicted, League Two Cheltenham were full of energy and purpose in the opening half-hour, winning a number of corners and pumping dangerous high balls into the West Ham penalty area.

With birthday boy James Collins imperious on his 200th appearance for the Club, though, the Robins were unable to seriously threaten Adrian’s goal.

On the half-hour mark, West Ham finally began to take control of proceedings, with Angelo Ogbonna seeing his header cleared off the line by home captain Kyle Storer, before Sakho’s first-time shot from Ayew’s low cross was well saved by Jonathan Flatt.

Ten minutes later, it was 1-0 to the Hammers as Mark Noble found Sakho just inside the penalty area, the No15 span and sent an accurate left-foot shot across Flatt and into the corner of the net.

And within 180 seconds it was 2-0 West Ham as Sakho turned provider for Ghana star Ayew, who latched onto his through ball and smartly placed his shot across the advancing Flatt.

West Ham were comfortable in the early part of the second half and could have extended their lead through Sakho’s deflected shot, Collins’ header or Arthur Masuaku’s mazy run, but Cheltenham held firm and began to create chances of their own.

Leading scorer Mohamed Eisa saw a shot blocked by Collins before substitute Kevin Dawson fired straight at Adrian, then the Robins went within inches of halving their deficit when Jamie Grimes’ low cross somehow eluded the sliding Dan Holman at the far post.

Amid the Cheltenham resurgence, Slaven Bilic sent on two replacements himself in Chicharito and Cheikhou Kouyate, with the latter making his first appearance of the season after recovering from a long-standing wrist injury.

West Ham did create a couple of half-chances in the closing stages through Sam Byram’s shot and Pedro Obiang’s wayward header but, by then, the race was all but run.

There was still time for Bilic to introduce Portuguese 17-year-old Domingos Quina for his first senior appearance since August 2016 – and first in domestic competition.

The Hammers will now eagerly await the third round draw, which will take place in China at the inconvenient hour of 4.15am on Thursday morning!