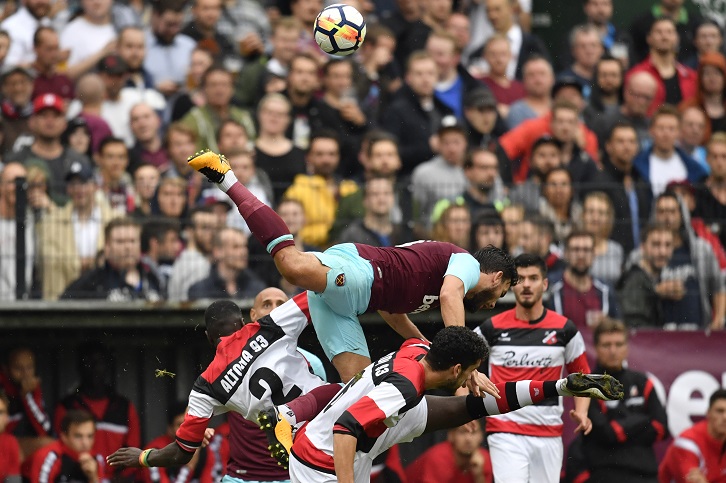 Ten-man West Ham United came from behind three times to share an entertaining 3-3 draw with Altona 93 in Hamburg on Tuesday evening.

Slaven Bilic’s side handed a debut to Chicharito and welcomed back Winston Reid from injury, only for the latter to be shown a red card at the Adolf-Jager Kampfbahn.

However, goals from Toni Martinez and Andre Ayew and a Joshua Du Preez own-goal seconds after the Mexican’s introduction ensured West Ham shared the spoils with their German hosts.

Altona, who warmed up to the sound of a chart-full of heavy metal hits, rocked their Premier League visitors inside five minutes. Pedro Obiang was penalised for a foul 30 yards out and Nick Brisevac arrowed the resulting free-kick around the wall and beyond Adrian’s full-length dive.

The stadium announcer was midway through congratulating the former Germany U16 international when Martinez fired the Hammers level. Captain Reid – back after recovering from shin surgery – pumped a long ball down the right touchline and the Spaniard outstripped his marker, cut inside and sent a rasping left-foot shot into the roof of the net.

The Altona fans among the capacity crowd were silenced, but not for long as first Dennis Thiessen, then Marco Schultz fired low efforts wide of the target. Clearly full of energy and determined to upset their illustrious guests the Regionalliga Nord side kept coming, with Samuel Hosseini heading Schultz’s teasing cross alarmingly close to Adrian’s far post.

Martinez flashed a low shot wide, but it was Altona who continued to look the more threatening, and it was Thiessen who curled the Germans back into the lead with an exquisite 25-yarder. It could have been 3-1 before the break too, but Milaim Buzhala volleyed Thiessen’s deep cross over the top from ten yards.

West Ham’s night went from bad to worse when the returning Reid, who had been booked just after Thiessen’s goal for dissent, repeated the offence and was sent-off after being whistled for a push inside the Altona box and was sent-off on the stroke of half-time.

Altona changed nine of their outfield players at the break and also introduced a third goalkeeper, while Bilic opted to make two alterations of his own – Jose Fonte and Arthur Masuaku replacing Robert Snodgrass and Aaron Cresswell.

Despite their numerical disadvantage, the Hammers were an improved team after the break and levelled within eight minutes of the restart when Andre Ayew smashed a bouncing through ball past the third stopper Tobias Grubba.

It was only a temporary respite, however, as Serhat Cayir lifted a diagonal free-kick into the penalty area and the ball dropped to centre-half Darius Stode, who prodded past Adrian.

The game was now end-to-end and, after Ayew had been fouled, Marko Arnautovic rattled the base of the post with a long-range free-kick.

Chicharito arrived with 20 minutes to go and his impact was immediate as the impressive Sam Byram raced down the right and crossed. The new boy drew two defenders, allowing the unmarked Nathan Holland too shoot, and the ball bounced into the net via a deflection off unlucky goalkeeper Joshua Du Preez. The new No17 then played in Edimilson Fernandes, but the Swiss dragged his shot wide.

Altona were not done, though, as Adrian raced from his line to deny the home side’s 13th substitute Tobias Lechler. Moments later, the No7 nicked the ball off the toe of Pedro Obiang but dragged his shot wide.

The stage was set for Chicharito to net the winner when he went clean through with three minutes remaining, only to round Du Preez and see his shot cleared off the line by Jakob Sachs.

Then, with seconds to go, the Mexican had his heels clipped inside the Altona penalty area, stayed on his feet and flashed a shot wide.

That proved to be the final chance of a frenetic game and West Ham’s three-match visit to Germany.

The Hammers will complete their pre-season schedule by taking on Manchester City in Iceland on Friday afternoon.