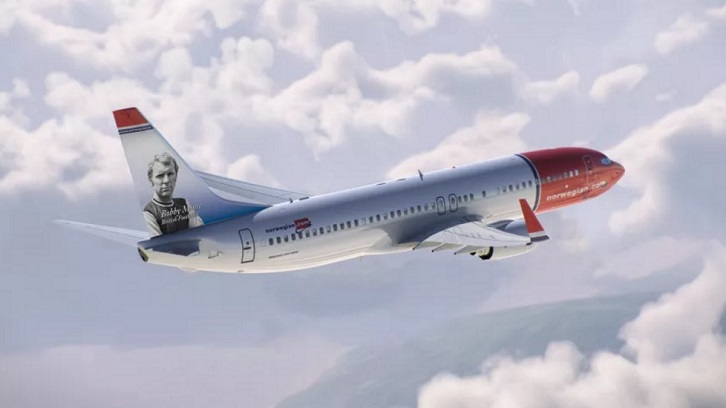 The announcement was made on Football Shirt Friday – the fundraising initiative that helps fund life-saving research into bowel cancer through the Bobby Moore Fund for Cancer Research UK.

Moore, who passed away from the disease in 1993, aged just 51, is the fourth British hero to be immortalised on a Norwegian tail fin, following children’s author Roald Dahl, pioneering pilot Amy Johnson and aviation maverick Sir Freddie Laker.

“As Norwegian continues its rapid UK growth, our ‘tail fin heroes’ offer us a perfect chance to pay tribute to some of the greatest Britons of all time,” said Ramdahl. “Bobby Moore has inspired generations of people for being an iconic footballer and leader on the pitch and a true gentleman off the pitch, so we are honoured to have him appear on our aircraft.”

Moore’s widow Stephanie Moore MBE, who founded the Bobby Moore Fund following her late husband’s death and has raised millions in the fight against the disease which took his life, welcomed the announcement.

“This is such a wonderful way to remember Bobby and to mark Football Shirt Friday,” she confirmed. “We want to see the whole nation wear their team’s colours with pride today and believe that together we can and will beat bowel cancer.

“We have made enormous progress in the last 50 years but sadly bowel cancer still kills 44 people in the UK every day. By joining forces, raising funds and channelling that unbreakable spirit of a football fan to support the Bobby Moore Fund, we can all help bring forward the day when bowel cancer is cured.”

Bobby Moore has inspired generations of people for being an iconic footballer and leader on the pitch and a true gentleman off the pitch, so we are honoured to have him appear on our aircraft

Born in Barking, Moore made more than 600 appearances in Claret and Blue between 1958 and 1974, captaining the Hammers throughout the most-successful period in the Club’s history.

This year marks the fifth Football Shirt Friday. Since 2013, thousands of pounds have been raised and invested in pioneering bowel cancer research carried out by leading scientists working across the UK.

Since the Bobby Moore Fund was established in 1993, bowel cancer mortality rates have fallen by more than a quarter (28%), and more than £23.5m has been raised for research. But we still have so much more to do.