Stat's A Fact - Brilliant back four 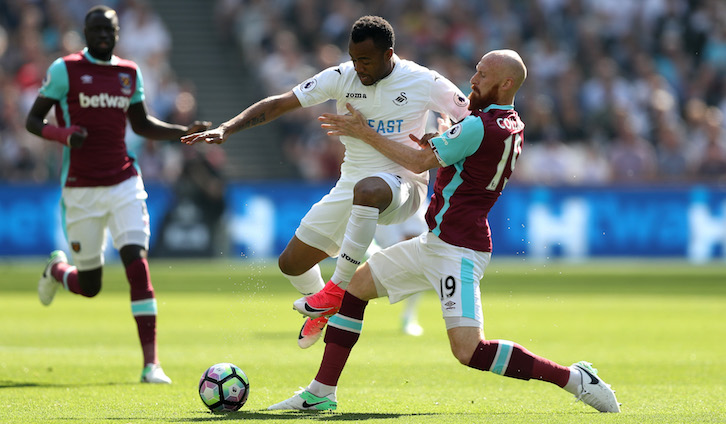 Cheikhou Kouyate’s 25-yard thunderbolt may have stolen the headlines on Saturday as West Ham United ran out 1-0 winners over Swansea City, but the foundations of the victory were laid by one of Slaven Bilic’s side’s best defensive performances.

Captain, Mark Noble, admitted that the back four chosen by Bilic was “chucked together”, forced by recent injuries to Winston Reid and Aaron Cresswell. Indeed, between them, Sam Byram, Jose Fonte, James Collins and Arthur Masuaku have averaged just ten starts this season.

Such was their impressive group effort at the back that three different sources named three different West Ham defenders as Saturday’s Man of the Match. On Twitter, West Ham supporters chose right-back, Sam Byram; statistically, Arthur Masuaku was the game’s best performer according to WhoScored.com; while Jermaine Jenas highlighted James Collins’ performance on BBC’s Match of the Day.

It was the Hammers’ first clean sheet in eleven matches, stretching back to 14 January when beating Crystal Palace 3-0 at London Stadium.

Collectively, the Hammers made 40 clearances (26 more than Swansea City), 15 interceptions, 14 tackles and 12 blocks. Such was the immense defensive effort put in by the Hammers’ back four, goalkeeper Darren Randolph was forced in to making just one save throughout the afternoon - a Gylfi Sigurdsson direct free-kick. West Ham’s back four stopped all and any of Swansea’s open-play shooting opportunities.

As well as going close to scoring his first goal for West Ham, right-back Sam Byram played a starring role as he nullified the threat of Swansea’s Gylfi Sigurddson down the left-hand side. Byram made four successful tackles – a last ditch effort on Sigurdsson in stoppage time the most telling, won three aerial duels, made three key interceptions and five clearances. Mark Noble summed it up: he was “unbelievable”.

James Collins and Jose Fonte partnered in the centre for the third time in a week and have been the Hammers’ ninth different central defensive combination this season. It was Fonte’s first clean sheet as a West Ham United player and arguably, one of his best performances in claret and blue. The Portuguese international made eight clearances – third only to Collins (12) and Arthur Masuaku (nine), won two aerial duels, and was vital in ensuring Swansea’s threatening second-half substitute, Fernando Llorente, was kept quiet.

Collins, making only his 13th Premier League start this campaign, made the game’s most clearances (12) including one vital effort just a yard out when Gylfi Sigurdsson’s cross looped over Darren Randolph. The Welshman also won three aerial duels and completed 18 passes at a success rate of 75 per cent.  His one block was a brave one too, denying Luciano Narsingh from the edge of the box.

At left-back, Arthur Masuaku had the responsibility of keeping first Wayne Routledge and then Narsingh quiet and his 8.1 star rating on WhoScored reflects how well he did his job. Masuaku made his second start in a week after coming in for Aaron Cresswell, who injured himself against Hull City on 1 April. The Frenchman’s 76 per cent pass completion rate was the best of the Hammers back four, he made five tackles – more than any other player on the pitch and also made the joint-highest blocks with four. Nine clearances was the second-most by any player on the pitch.

For Swansea, goalkeeper Lukasz Fabianksi was arguably the best performer. Despite conceding the only goal of the game, the Polish international was forced into making five saves – one of which was a fine diving effort to deny Andre Ayew from 12 yards. The introduction of Narshingh and Llorente at half-time was Paul Clement’s attempt to make life harder for West Ham United’s defenders but the four stood firm and by full time, had earned their clean sheet and three points.

For more stats from Saturday's game, visit our Match Centre.