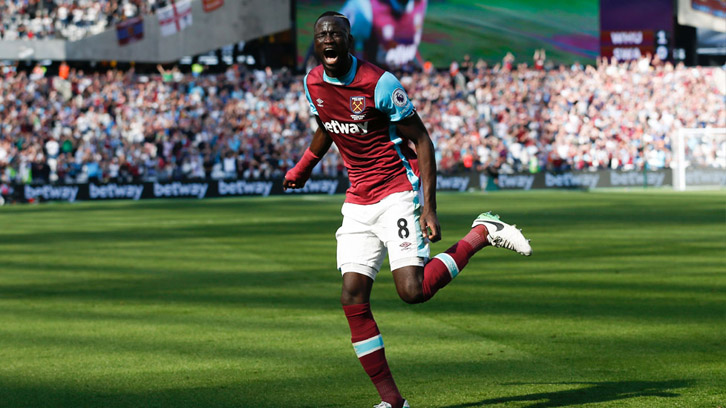 “Nearly 60,000 supporters, the 18 players, the staff and everyone else – we are all a team,” Slaven Bilic claimed before Saturday’s vital clash with Swansea City. It certainly showed as the Hammers were 1-0 winners at London Stadium.

Living every minute, kicking every ball, the supporters proved we are West Ham United, after all. A huge day for the Club, and a huge win to go with it.

Cheikhou Kouyate’s 44th minute strike, ultimately the defining moment on a warm spring afternoon, could live long in the memory in the 2016/17 campaign.

And fittingly under the April sun, the Hammers began the first half on fire. Michail Antonio was the driving force behind most of the hosts’ good play, driving into the Swansea box and causing frequent trouble.

On the quarter of an hour mark, Manuel Lanzini curled a free-kick marginally over the crossbar and five minutes later, Robert Snodgrass was denied a first Hammers goal when his header was stopped on the line by Lukasz Fabianski.

The pressure continued. Lanzini fired another strike over and Andre Ayew was this time the man to be denied by the in-form Fabianski as the Pole dived low to his right to deny a delightful curling effort.

You can forgive any West Ham fans who then began to have those ‘here we go again’ thoughts. Jordan Ayew – brother of Jordan – wracked the nerves around London Stadium when he failed to convert from a couple of yards, and minutes later his cross for Sigurdsson was inches too long.

But then came the moment – the moment that could be defining in West Ham’s season.

Yet to cause the Swans too much trouble, there seemed little on when Kouyate picked up the ball halfway into the opposition half. But the Senegal international was allowed to advance and advance and as the space opened up, so did the eyes of 56,000 Hammers.

You beauty. Crashing a shot into the bottom corner from 20 yards, Kouyate sent the home fans into raptures – a flash of relief around London Stadium as the referee blowed for half time.

The second period almost began as the first had ended – with a Hammers goal. Stretching to get on the end of Ayew’s chipped cross, Sam Byram could not do enough to turn his effort goalwards, however.

The Hammers were made to wait almost 25 minutes for their next opening, though. It came when two substitutes – Feghouli and Calleri – combined well only for the latter to chip just over the bar from the front post.

Lanzini went close with another free-kick 12 minutes from time and Ayew stung Fabianski’s palms once again, but the final ten minutes were about ensuring all three points would be staying in east London.

Sub Luciano Narsingh’s tame effort from the right hand side, which floated over Randolph’s bar, was the closest Swansea came to stealing a point though, and the Hammers held on to record a massive three points for the Football Club.