Adrian - We defended so well 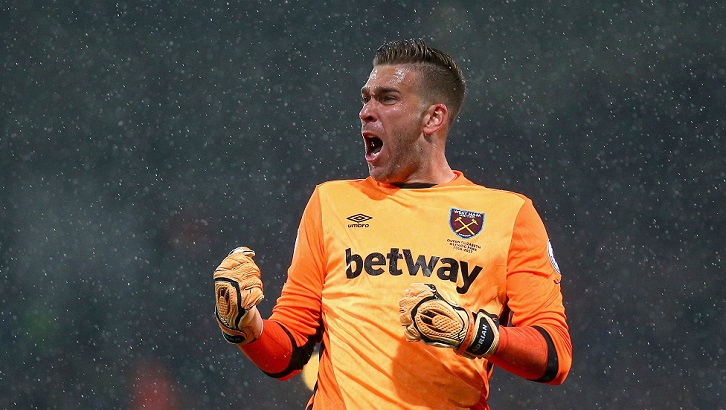 The Hammers dominated the first half and were rewarded by Manuel Lanzini’s second goal of the season, before Christian Benteke missed a penalty on the stroke of half-time.

West Ham’s task was made even harder when Aaron Cresswell was controversially sent-off for two bookable offences in the space of 60 seconds, but thanks to a resilient defensive display and a spectacular late save from the Spaniard, the Claret and Blue Army went home from a sodden Selhurst Park wet but happy.

“I think we fought until the end with one player less, which was very difficult because they pushed and their fans pushed a lot,” he began. “We defended so well until the last minute and finally we got the win and it’s a massive three points for us.

“It would have probably changed the game if he’d scored but he missed the penalty and we continued fighting in the second half and I think we deserved the win.”

Adrian had kept just one clean sheet this season – in a 1-0 victory over AFC Bournemouth at London Stadium back in August – and the Spaniard was delighted to keep his goal intact in south London.

The No13 was aided by a determined display by his outfield colleagues, who lined up in a new but very effective 3-5-1-1 formation.

With Winston Reid, Cheikhou Kouyate and Angelo Ogbonna rock solid – aside from the Italian’s trip on Benteke to concede the spot-kick – West Ham were a different proposition from recent matches.

“It’s very important to keep a clean sheet because if you score one goal, like we did today, you win three points,” he continued.

“Today is a change of our mind. We need to start winning games and getting points because we want to climb the table.

“This system worked for us. Every game is different and today we went with this one and luckily for us, it worked!”

Finally, Adrian was delighted to deny Belgian Benteke, who not only missed a penalty but also saw a header hit the outside of the Spaniard’s post seconds before half-time.

“He’s a great striker and he missed a penalty and had some chances, but we kept fighting. At the end of the day, I’m so happy for my team keeping a clean sheet and getting three points.”