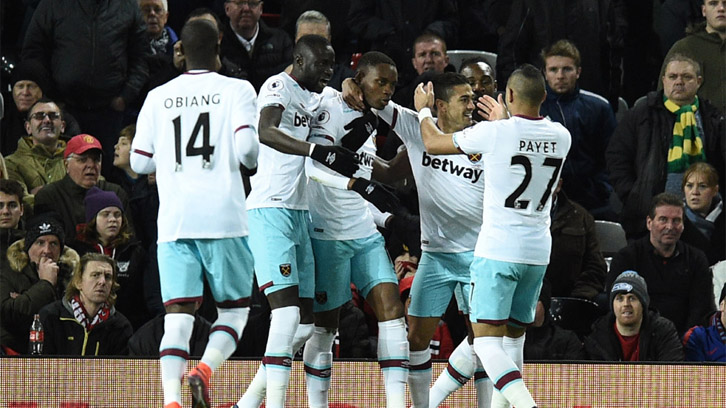 Diafra Sakho’s early opener was cancelled out by Zlatan Ibrahimovic as the Hammers were held by Manchester United in the first of two trips to Old Trafford in four days on Sunday.

In only his second appearance of the season, the Senegalese headed brilliantly past David De Gea to give the visitors a second minute lead, but United’s Swedish talisman grabbed the leveller less than 20 minutes later.

A string of superb Darren Randolph saves kept the hosts at bay throughout the second half, and Slaven Bilic’s men collected a crucial Premier League point ahead of Wednesday night’s EFL Cup quarter-final.

The perfect start for West Ham was provided by Sakho as he latched onto Dimitri Payet’s perfect set-piece delivery from the right and, stretching on the dive, planted a header past De Gea.

Jose Mourinho’s side then began to take control at Old Trafford, though their first meaningful effort was comfortably saved by Randolph who was right behind Juan Mata’s tame attempt.

But the hosts equalised moments later, when Zlatan Ibrahimovic sneaked in behind James Collins to flick home Paul Pogba’s inch-perfect cross from deep in the 21st minute.

The first half’s moment on controversy involved Pogba shortly after, as manager Jose Mourinho was sent to the stands following an angry outburst.

The Frenchman, falling after going past Mark Noble, was correctly booked for diving, prompting the explosive bottle-kicking moment from his boss.

The superb Darren Randolph was on hand to deny Jesse Lingard one-on-one with his legs, before then saving low to his left to excellently keep out the England international for a second time.

The Hammers began the second period better than they had ended the first, with Sakho glancing Payet’s corner just over and the Frenchman then having a go himself from a free-kick, only to be denied by Spaniard De Gea.

Randolph in goal for Slaven Bilic’s side was getting used to denying Lingard by the 74th minute, as he was again behind an effort from the winger, but the visitors’ nerves were really ratted two minutes later.

Substitute Henrikh Mkhitaryan somehow struck the post from close range, and though Lingard was able to tap home, the linesman’s flag cancelled the celebrations.

Randolph next denied Pogba before foiling Ibrahimovic late on after the forward’s back post header seemed destined for the net, and Cheikhou Kouyate’s last-ditch clearance frustrated United further.

There was nearly a fairytale ending to the clash for the Hammers but former Manchester United forward Ashley Fletcher, collecting a superb Antonio centre, could only fire straight at De Gea.

As Jonathan Moss blew for full time, the fixture ended level and the Hammers picked up a crucial point ahead of Wednesday’s cup clash back in the north west.