West Ham United are delighted to announce that highly-rated defender Reece Oxford has signed a new four-and-a-half-year contract with the east London Club.

Despite strong interest from some of the biggest teams in the country, Oxford was thrilled to pledge his long-term future to the Hammers.

Oxford is rated one of the best young talents in the English game and has already shown his potential when he became the second youngest-ever player in the Premier League last season.

The tall, ball-playing defender or midfielder made his competitive debut against Arsenal, aged just 16, and produced an outstanding display in a 2-0 victory at Emirates Stadium.

Manager Slaven Bilic has already shown that he is willing to give his youngsters a run in the team if they are good enough and Oxford says that played a major role in his decision to stay with the east London Club.

West Ham have been renowned for bringing through some of the best young talent in the country and Oxford says he would love to follow in the footsteps of former players such as Rio Ferdinand and Joe Cole and become a major star over the next few years.

Oxford said: “I am happy to have signed my new contract. There was a lot of speculation about my future but I am happy that it has been done and I can get back to football. I just want to kick on now.

“I have made my family proud and hopefully I have made the fans proud that I have signed a new contract. Hopefully I can get into the team and help them throughout the whole season.

“I have a good relationship with the gaffer and hopefully I can get a lot of game time here. I have seen some of the old players like Joe Cole and Rio Ferdinand and I want to follow in their footsteps.

Oxford, who is set to return to action soon after recovering from an ankle injury, joined West Ham when he was just 13 and quickly shone as a member of the Academy of Football.

He was named among the substitutes for the League Cup second-round defeat by Sheffield United on 27 August 2014, aged just 15.

The all-round defender, who strong in the tackle and in the air, as well as being comfortable bringing the ball out from the back, made his U18 debut for the Hammers in a Premier Academy League game at Norwich – even though he was still an U15 schoolboy.

Oxford continued to impress as he made his way up to the Development Squad and was thenhanded a call-up to the first-team in July 2015, when he became West Ham's youngest-ever player when he featured at the Boleyn Ground against Andorrans FC Lusitans in the Europa League. 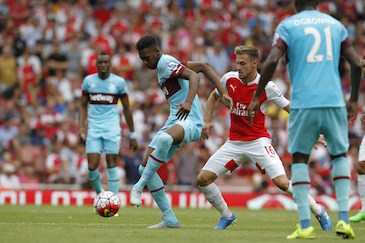 Bilic was certainly impressed and shocked a number of people in the game when he named Oxford in the starting line-up for the opening game of the season at Arsenal, but the move paid off as the youngster kept Mesut Ozil at bay and showed he could be a major star in the top flight.

Oxford also started against Leicester and went on to make more appearances as a substitute, helping the Club record Premier League wins over Tottenham Hotspur and Everton.

He also managed to end last season with silverware by leading the Development Squad to a memorable win over Hull City in the U21 Premier League Cup.

To complete an amazing 2015/16, the teenager also won the Young Hammer of the Year award in recognition of a terrific breakthrough season.

And after playing for England at every level from U16s to U19s, Oxford now has set his sights on making his breakthrough into the senior squad.

“I have been representing England since the U16s and have been captain of the side. I have progressed through to the U19s and was then pushed up to the U20s last year when we got to the Euros last summer and reached the semi-finals.

“I want to push on again, and with the U20s and U21s being involved in major tournaments next summer I would love to be a part of either team. I just want to get playing again.

“Gareth Southgate has shown he is prepared to put the youngsters into the team and hopefully I can catch his attention.”