Mark Noble admitted to a mixture of joy and relief after shooting West Ham United to a vital Premier League victory over Burnley.

The Hammers were made to work hard for the three points at London Stadium, hitting the post twice before Noble converted the rebound after Tom Heaton had saved his penalty - his first goal at West Ham's new home.

West Ham were not at their fluent best, and endured a few nervous moments during the second half, with Darren Randolph making a couple of important saves. The captain admitted the Club’s precarious position had played a part in their stuttering yet ultimately successful display.

“It’s not one of them you’re going to watch on Match Choice, let me tell you!” said the No16. “We felt we were unlucky to go in 1-0 at the break, as we’d hit the post and had a couple of other chances.

“I wasn’t nervous at all with the penalty. It’s funny because I was at the Managers and Captains event at the Premier League earlier in the season and they were doing a big thing on me and Tom on penalties and he chucked one out to me, which was nice!

“We knew they would chuck everything at us in the second half and the boys defended great. Darren made a couple of good saves again and we made a clearance off the line, but at this stage of the season and where we are, we needed that.”

Noble and company were by far the better team in the first half, hitting the woodwork through Pedro Obiang and the skipper himself, and fashioning a succession of other half-chances.

The breakthrough arrived when Ben Mee hauled down Winston Reid inside the penalty area. Although England stopper Heaton kept out his spot-kick – his first missed penalty since August 2014 – the No16 reacted quickest to fire home the rebound.

Having held on to complete a victory that lifts them four points clear of the bottom three into 16th place, Noble said the Hammers would head into Saturday’s home game with Hull City with renewed confidence and belief. 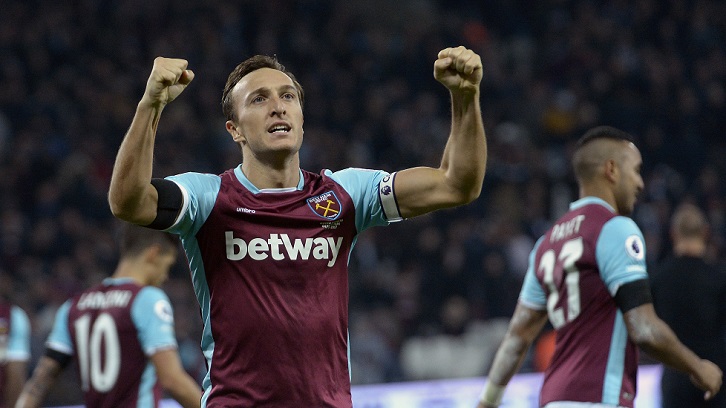 “At this stage, I’d be lying if I said there wasn’t a point in the second half when we just wanted the final whistle! We had to dig in and fight for each other,” he confirmed.

“I think we sat back. Obviously nerves came into it because we wanted the win so badly and we just tried to hit them on the counter attack.

“When they throw balls into the box and attack balls the way they do, it’s hard to defend against, so the boys did great.

“These three points are massive. We’ve got another home game on Saturday and, as I said, at this stage and where we are, it doesn’t matter how we play, but how many points we get. We’ve played a lot better than that and lost games.”

Vlašić: I worked for this moment

Moyes: We’ve built a bit of confidence back