West Ham United are delighted to announce that promising goalkeeper Nathan Trott has signed his first professional contract to keep him at the Club until 2020.

The stopper is one of the country’s most highly-rated keepers and recently earned his first England call-up, joining up with the U19 squad in October.

Starring for the Hammers’ Premier League 2 side this season, Trott has won plenty of plaudits and pledged his future to the east Londoners by penning a three and a half year deal.

Trott has trained with the first team at the Club’s Rush Green base on a number of occasions and, having put pen to paper on his first professional contract, is keen to push on and impress further this campaign.

He said: “I think it’s a massive achievement for me and my family and I can only thank the people who are around me and support me every day to get where I am today. 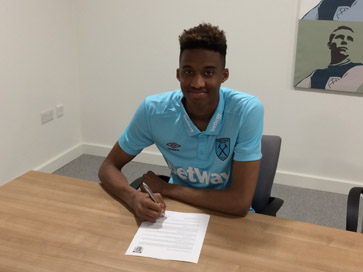 “I want to give myself extra time for me to work and I want to try to prove to fans that I can become a really great player.

“I want to establish myself as the No1 for the U23s and play week in, week out and get used to the feeling of being No1."

The Hammers recently secured the future of equally promising talent Domingos Quina and have showed a lot of faith in young players, giving the likes of Reece Oxford and Marcus Browne their senior bows over the last two seasons.

Bermudan-born Trott revealed the confidence the Club has in youngsters played a huge role in his decision to sign before praising the work of those in the Academy of Football.

“It was probably the main factor in me wanting to sign here,” the 18-year-old continued. “Your work is always seen around the Academy and you’ll be given the chance if you deserve it.

“[At the Academy], Terry [Westley, Academy Manager] and Liam [Manning, Academy Coach and Assistant Manager] have been very supportive of me and and my coach JJ [Jerome John, Academy Goalkeeping Coach] as well.

“Those three are probably the main three who have pushed me. It’s important that now they keep onto me.

“I also like the competition [at the Club]. I don’t see it as a negative thing. I think it helps me to become a better player myself, especially when you’re training with first team goalkeepers like Randolph and Adrian. I think you get better as you train with people who are better than you.”

Finally Trott, who describes himself as a goalkeeper who depends on his reflexes and has brilliant footwork, explained what it would mean to him to make his first team bow at the Club’s new London Stadium home one day.

“It would be a dream for me to make my debut at the new Stadium. Obviously that’s my main goal, and I want to work my way through the ranks at West Ham and hopefully in a couple of years or sooner I can make my debut at London Stadium.”