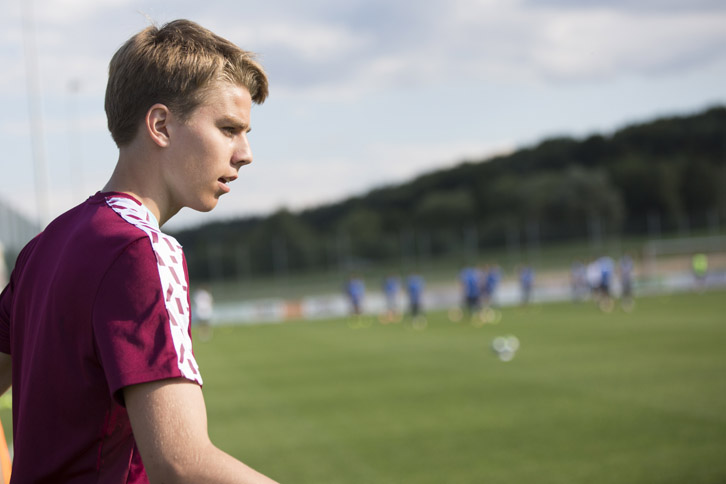 West Ham United are delighted to announce that Martin Samuelsen has signed a new four-year contract with the Club.

The Norwegian winger, who joined the east Londoners last summer, has put pen to paper on a deal that will see him remain at the London Stadium until 2020.

The exciting 19-year-old joined in June 2015, having left Premier League side Manchester City, and made his competitive first-team debut less than a month later, playing in the Hammers’ UEFA Europa League qualifier against Maltese side Birkirkara at the Boleyn Ground.

Having also played in the return leg, Samuelsen earned a loan move to League One outfit Peterborough United in November and impressed at London Road, making 20 appearances for Posh, scoring two goals.

The youngster’s superb debut season was then rounded off in June by a senior international debut, as he turned out for Norway in a 3-2 win over Iceland in Oslo.

The hot prospect revealed his delight having committed his future to the Hammers for a further four years.

“I’ve been here for a year now, and nothing makes me happier than signing a new contract at the Club to stay even longer,” he said.

“I’ve really enjoyed the year I’ve had at the Club so far and I want to build on that. It’s just been one upward journey so far, and I’m really happy to sign a new deal and hopefully I can push on and do even better.”

One of a number of Hammers who impressed on loan in England’s third tier last season, Samuelsen is eyeing another potential move during the 2016/17 campaign.

“This season, I think it’s either going to be another loan or first team football for me at West Ham,” he continued. “I really enjoyed my time at Peterborough United last season and to have another spell playing good football on loan somewhere would be great.

“Both options would be good for me, but one is tougher to achieve than the other! Whatever happens for me this year, I’ll go into it 100 per cent committed. My long-term goal is to get into the West Ham first team XI.”

Having already turned out at the Club’s new home against Juventus during pre-season, Samuelsen is itching to get back on the pitch at London Stadium after enjoying a small taste of the experience.

“It’s a huge moment in history for West Ham with the move into the new ground and just playing the 20 minutes against Juventus have made me hungrier for even more game time there.

“It’s just amazing to commit myself further to the Club and I can’t wait for what the next four years has in store for me with West Ham.”