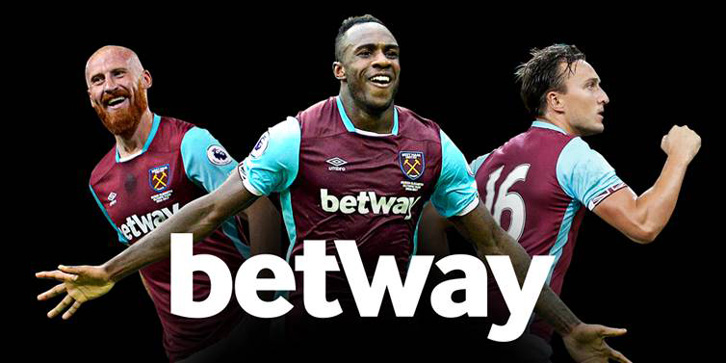 West Ham United are pleased to announce the renewal of the Club’s partnership with principal sponsors Betway. The new deal is the largest sponsorship agreement in West Ham’s history.

The Club’s original deal with Betway was agreed in February 2015, and thanks to the great success of the sponsorship agreement to date, both parties were keen to secure the significant extension announced today.

Betway are one of the biggest players in the European betting, casino, poker and bingo markets, employing more than 1,000 people, and priding itself on providing its customers with a bespoke, fun and informed betting experience, supported by a safe and secure environment.

West Ham’s Vice-Chairman Karren Brady hailed the agreement as further evidence of the continued upward trajectory of the Club, especially as they settle into their new home, the magnificent London Stadium.

“We are delighted to extend our relationship with Betway, signing our biggest-ever commercial deal in the process,” the Vice-Chairman said. “Our brand has grown faster than any other major Premier League club in the past two years, and an equally ambitious, forward-thinking brand like Betway wants to be associated with that success.

“Betway have been with us during two of the most momentous years in our history, as we said farewell to the Boleyn Ground and moved into our stunning new home, but they know that the best is still to come. The revenue that this deal generates will be reinvested in our playing squad, and will allow us to enjoy ever greater success in the years to come.”

Confirming the new agreement, Betway said it was a sign of their confidence and excitement at the future that lies ahead for West Ham United.

Anthony Werkman, marketing director at Betway, said: “We are thrilled to renew our agreement with West Ham United and proud to maintain our close association with one of the most historic teams in English football, during such a hugely significant era for the Club.

“Since we first became principal sponsor in February 2015, the partnership has been a real success for Betway and West Ham. This is reflected by the fact that both parties were not only keen to renew the deal early, but also for a substantial period.”

Score a penalty at London Stadium to win £5,000 with Hammer Shot!

Watch Betway’s documentary on ‘What Makes a Good Pundit?’