The Hammers head across London to face Antonio Conte’s team as the Italian takes to the dugout for the first time as Blues boss.

Bilic says West Ham have prepared well for the new campaign and are ready to mix it once again with the league’s biggest teams.

Slaven, how excited and how ready are you for the new Premier League season?

SB: “We’re excited, of course. It starts for us on Monday, we did a good pre-season and we are ready for the start. We have a good squad – we’ve kept most of the players and we’ve added some players too. We are expecting them to improve us – we’d expect that even without them because we have been together for a year now and had a good last season.

“We are expecting a good season, of course.”

What are you expecting from Chelsea?

SB: “A tough game, a good game against a big club with a new manager. He is a great manager – he did a terrific job with Juventus and with Italy. He is one of those who wants to put his stamp on the team, not just continue what the previous managers have done, but to change the way they approach the game. Change the principles and nature of the game.

“He’s one of them, that’s why I rate him so highly. Is he going to do it straight away? It is more difficult of course to change the long-term habits that players have had, especially when they are big players at a big club. But, I’m sure he is going to do a good job there.” 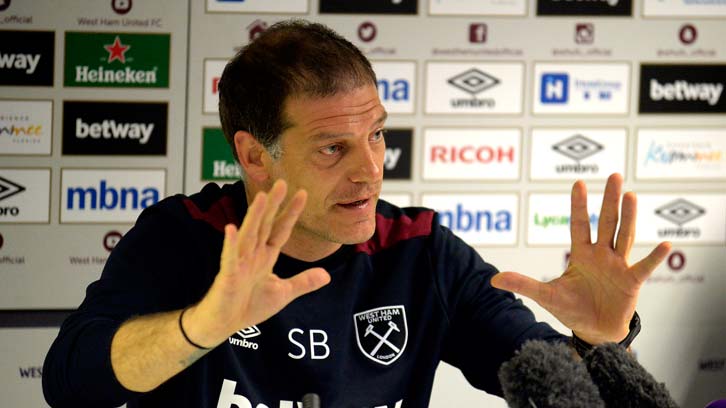 You and your team had a lot of good results against top teams in the league early last season. Is that something that will give this squad confidence going into this season?

SB: “In one way yes, in the other way it’s very dangerous. If we think we’ve got good results against most of them last season and we’re going to do it now by default, it doesn’t happen by default.

“But it’s a good memory, it’s a good experience, it’s a good pattern that we know very recently we have done this, this, this and this. If we do those basic things again in terms of compactness, togetherness, team spirit and humility, then of course it’s good to rely on the knowledge that you have done those things against those clubs in those circumstances.”

Are you missing any players for Monday’s game?

“We will see how we are going to start on Monday night. There are not many tactical differences, we have Plan A and Plan B. We have that already, but it is still very open on a couple of positions for who is going to start and which players are likely to finish the game.

“With some players you want to have them on the pitch for the last 15 minutes, so we are going to see.”

What about Dimitri Payet?