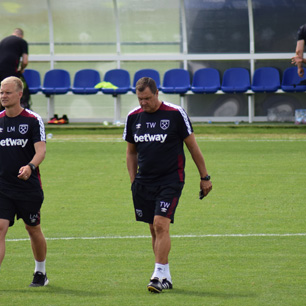 The U23s – in Premier League 2 Division 2 next season – faced a Chelsea side on Friday who play in the tier above them in a final friendly fixture, and were beaten 3-0.

But Westley insisted it was a positive test for his players and explained just how helpful pre-season has been for his youngsters.

He said: “I think if you go right across all of our pre-season games, we’ve played men, we’ve played Football League teams, non-league sides, foreign sides and then finally a top, top academy side. There have been some real different challenges.

“Chelsea were a high-quality, technical team who moved the ball around the pitch and were physically very good. It has certainly been a very challenging pre-season. There have been some high points, and today helped in terms of a reality check.

“If you want to get in Slaven’s group, you need to be reliable and think about things you need to improve on. We had some really good opportunities today, but nothing happened.

“We made some wrong decisions. We turned the ball over a bit too quickly and they were good enough to punish us.”

Many of the squad have ambitions of going on loan, playing regularly for the Dev Squad and even making an impression in the Club’s first team this season.

And Westley believes his players are realising what it takes to step up and catch the eye of the Hammers’ Croatian boss.

“Against Domzale, we had a player from this age group, who is 17, playing in front of 54,000 people in Reece Oxford,” Westley continued. “You might think you’re there, but talking about it and actually doing it are two different things.

“We have talked about going on loan; these players want to be able to go on loan, but there are also scouts and managers here watching the Chelsea youngsters.

“At our level, you have to be as good as Venlo and Peterborough and Southend and compete against Chelsea.

“All round against Chelsea, it was a good test. Next week we start, and we prepare for the Stoke City game, and we’re all looking forward to that.”