Alex Song has announced that he has retired from international duty with Cameroon with immediate effect‎.

The on-loan West Ham United midfielder made the announcement on social media on Tuesday evening in a move that will see him miss the upcoming African Cup of Nations in Equatorial Guinea. Song cited the main reason for the decision as his ambition to rebuild his club career with the Hammers.

In a statement, Song said: 'Since the World Cup in the summer and my subsequent exclusion from the Cameroon squad for the African Cup of Nations I have taken the decision to retire from international football.

"It its true there were some discussions of late to include me in the squad for this tournament but I feel after a lot of careful thought and numerous discussions with my family this is the right decision.

"My love for my country will never change but I want to take time to focus purely on domestic football and start to rebuild my career at West Ham United. I wish Cameroon all the best and the team will always be in my heart."

Song's last game for Camroon came in the FIFA World Cup 2014 in Brazil, when he was sent off against Croatia. In total, the 27-year-old played 47 games for The Indomitable Lions after making his debut in 2005. 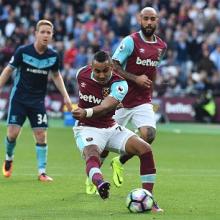