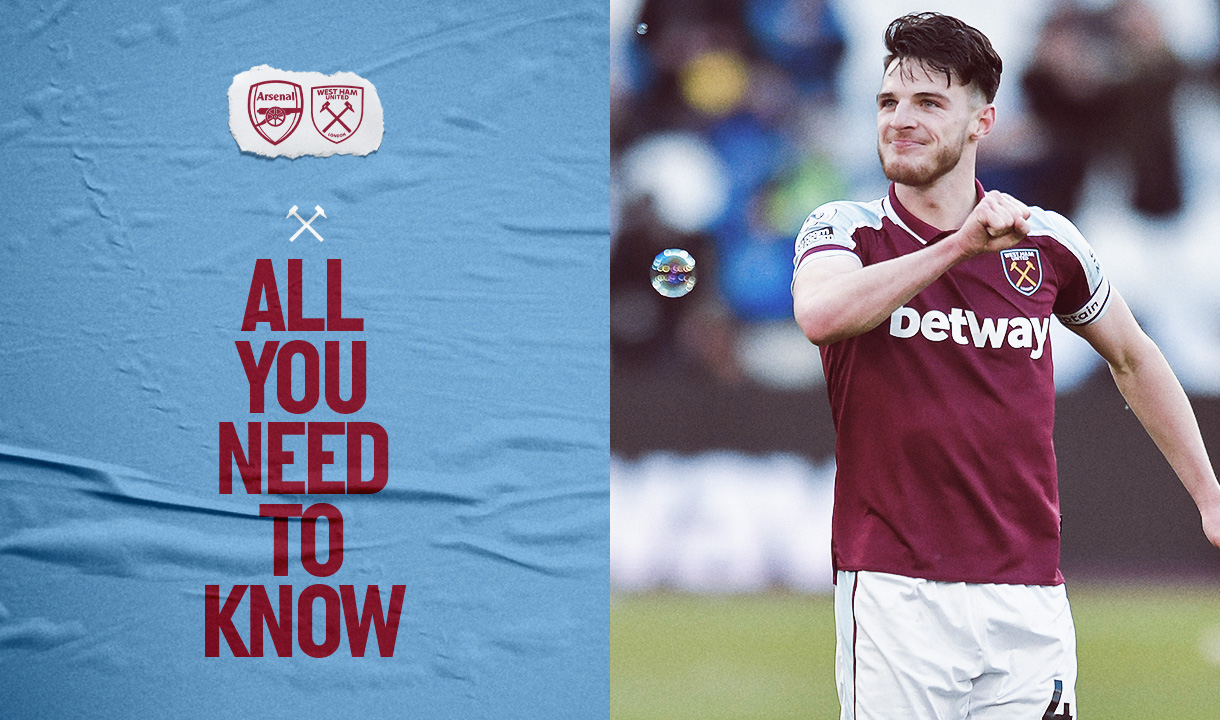 Arsenal v West Ham United - All You Need To Know

West Ham United make the shortest away trip of the Premier League season on Wednesday night, travelling less than six miles west to Emirates Stadium to take on Arsenal.

The Hammers play their 17th top-flight fixture of the 2021/22 season in north London, where David Moyes will manage in the Premier League for the 600th time in his illustrious career - becoming just the fourth to do so after Arsène Wenger, Sir Alex Ferguson and former Hammers boss Harry Redknapp.

This will be the 33rd time Moyes has managed a team in a Premier League fixture against the Gunners, taking Arsenal level with Chelsea as the opposition he has managed against most in the top flight.

It is a big game, too, with West Ham starting the matchweek fourth in the table, a point ahead of both Manchester United in fifth and Arsenal in sixth. With the former's match against Brentford postponed due to COVID and seventh-placed Tottenham Hotspur away to eighth-placed Leicester City, the Hammers can open up a gap on the teams below them with a win.

However, victories at Arsenal have been few and far between in recent seasons, with West Ham without a win in their five previous Premier League visits to Emirates Stadium, in addition to an EFL Cup fifth-round defeat in December 2017.

Wednesday's 8pm kick-off is being shown live in the UK by BT Sport 1.

We will also be covering the game live with a blog and audio commentary on whufc.com and our Official Appand across our social media channels, with goals, highlights and exclusive reaction to follow after the final whistle.

The UK Government has announced that, subject to parliamentary approval, its ‘COVID-19 Autumn and Winter Plan B’ will now be implemented.

This means any venue with a capacity of at least 10,000 must now ensure attendees have COVID certification in the form of a valid COVID Pass or proof (text/email confirmation) of a negative lateral flow/PCR test taken within 48 hours of the fixture.

Please note, these measures will apply for Wednesday's match, so if you are a member of the Claret and Blue Army who plans to attend the game, click here to read the relevant important information for supporters.

David Moyes is hopeful Aaron Cresswell will recover from the back injury he suffered when colliding with the goal post at Manchester City last Sunday, which caused him to miss our last four fixtures.

Arsenal will be without striker Pierre-Emerick Aubameyang after the Gabon international was stripped of the captaincy and informed he will not be considered for Wednesday's game due to disciplinary issues.

Arsenal are seemingly on the right track under manager and former midfielder Mikel Arteta.

In his first managerial role, the 39-year-old has recorded 56 victories in his first 105 games in charge, won the FA Cup and Community Shield and was voted Premier League Manager of the Month as recently as September 2021.

The Gunners lost their opening three Premier League matches to slump to the bottom of the table but, since then, have lost just twice – away at Liverpool and Manchester United – to storm up the standings. A 3-0 home win over Southampton at the weekend lifted them into the top six and within a point of West Ham United in fourth.

After missing out of qualification for European football last season, Arteta will hope to lead his team back into continental competition, either via their Premier League position or by winning the EFL Cup, where they host League One club Sunderland next week and will be confident of reaching the semi-finals for the fifth time in six seasons.

West Ham United have not gone well against Arsenal in recent years, particularly at Emirates Stadium.

Arsenal have won ten of their last eleven home Premier League matches against West Ham, losing the other 2-0 in August 2015, when Slaven Bilic marked his first top-flight game in charge with a sensational win in north London courtesy of goals from Cheikhou Kouyate and Mauro Zarate.

After winning three consecutive Premier League matches against Arsenal between February 2006 and April 2007, including becoming the last visitors to win at Highbury and the first to taste victory at Emirates Stadium, West Ham have won just two of their last 26 top-flight meetings with the Gunners.

Going back further, our biggest top-flight win over Arsenal occurred on 7 March 1927, when a Vic Watson hat-trick helped us to a 7-0 First Division victory at the Boleyn Ground.

We have never beaten Arsenal by wider than a two-goal margin away from home in our history.