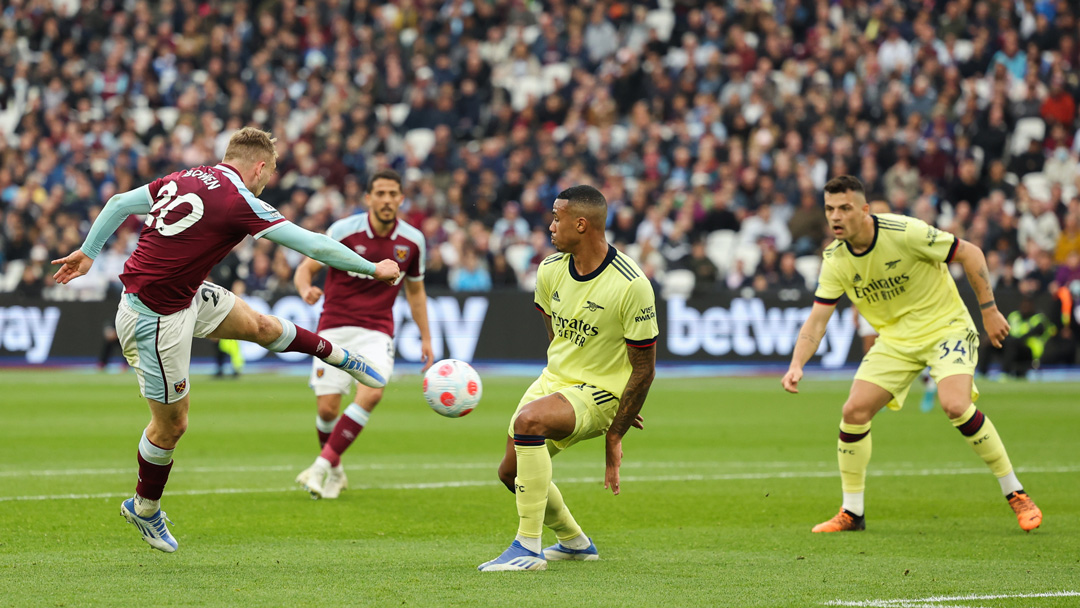 As has been the case too often in recent weeks, the Hammers matched their opponents for long periods in general play, only for defensive lapses and a failure to make the most of promising positions in attack to cost them a positive result.

And so it was that two set piece headers from Rob Holding and Gabriel saw the Gunners steal a victory their all-round performance arguably did not warrant, and render Jarrod Bowen’s 16th goal of the season a mere consolation.

The defeat leaves West Ham seventh in the table, three points ahead of Wolverhampton Wanderers, who have a game more to play.

With one eye on Thursday’s UEFA Europa League semi-final second-leg with Eintracht Frankfurt in Germany and both injuries and suspensions to deal with, Moyes made multiple changes to his starting XI, resting Michail Antonio and Tomáš Souček, starting Club captain Mark Noble in midfield and employing Aaron Cresswell as the left centre-half alongside Kurt Zouma in a back four.

The alterations did not affect his team’s fluency in the early stages as West Ham made a bright start to an open game, albeit without creating a clear opportunity to score in the opening 20 minutes.

Arsenal took a little longer to settle into their own rhythm, and whenever the Gunners did pass their way into the home penalty area, Zouma and Cresswell were able to quell the danger.

The first half chance finally arrived on 26 minutes, to the unlikely figure of Zouma. The Frenchman found himself in possession inside the Arsenal half, so ploughed forward before finding Saïd Benrahma wide left. The Algerian crossed and Zouma, having continued his run, saw his header hit Holding.

Like London buses, two more chance followed soon after. First, Pablo Fornals could only lash over after teeing himself up on the right side of the Arsenal box, then Benrahma’s shot from the rampaging Vladimír Coufal’s cross was well blocked by Holding at the end of a sweeping counter attack.

West Ham were on top now, and Declan Rice was next to go close, driving through the heart of the Arsenal midfield before shooting low and on target, but too close to fellow England international Aaron Ramsdale.

Then, out of almost nothing, the Gunners took the lead seven minutes before half-time.

Bowen gave the ball away inside his own half and Eddie Nketiah forced Łukasz Fabiański into a save low to his left. From the resulting Bukayo Saka corner, Holding rose above Zouma and headed down and inside the far post to put the visitors in front.

West Ham went straight up the other end and won a corner of their own, only for Rice to see his own header acrobatically tipped away by Ramsdale.

Then, with pressure building, the Irons got the goal their all-round play deserved 30 seconds before the break. Rice’s diagonal ball found Coufal, who controlled on his chest and cut back for Bowen, whose left-foot shot bounced past Ramsdale via a vital deflection off Gabriel.

Into the second half and West Ham picked up where they had left off and it took less than three minutes for Benrahma to fashion a chance, only for his shot to hit Holding in the head and spin clear.

Moments later, Bowen ran onto a through ball and went down as Ramsdale slid out, well outside his penalty area, but referee Mike Dean decided no contact was made and showed the yellow card to the West Ham goalscorer.

And things got worse two minutes later. Saka was initially denied by Fabiański, but yet again Arsenal benefited from the resulting corner. Saka’s initial delivery fell to Gabriel Martinelli, whose cross was headed in by Gabriel, unmarked at the far post.

Yet again, West Ham had conceded when they looked far more likely to score themselves just moments earlier, and Fabiański had to be alert to hold two well-struck Nketiah efforts either side of the hour-mark to keep the deficit at just one.

A second response was needed, but West Ham could not find a way through. Even when they did and Fornals’ shot was blocked, Arsenal broke the length of the pitch and Nketiah shaved the post.

The final 20 minutes were full of frustration for Moyes and his players as the Gunners organised themselves, then slowed the game whenever the opportunity presented itself.

The result was a defeat and now all attention turns to Germany and Thursday’s Europa League tie.