The Hammers travelled to Germany hopeful of overturning a 2-1 first-leg deficit, but saw their hopes evaporate in the opening 45 minutes at Deutsche Bank Park, where Aaron Cresswell was sent-off before Rafael Borré swept home to extend the hosts’ advantage.

Try as they might to battle back into the tie, David Moyes’ men were unable to find a way to goal and saw their dream of winning a first major trophy since lifting the FA Cup in 1980 shattered, as Frankfurt won 1-0 on the night and went through 3-1 on aggregate.

The odds were stacked against West Ham before kick-off: No away team had ever won a UEFA Europa League semi-final after losing the first leg at home; Eintracht had won all nine previous UEFA ties in which they recorded an away victory in the first leg; West Ham’s only previous home first-leg defeat, to Borussia Dortmund in the 1965/66 European Cup Winners’ Cup semi-finals, was followed by a 3-1 second-leg loss in Germany.

Moyes’ players were also faced with a wall of sound – and smoke – from Eintracht’s Nordwestkurve before kick-off and a barrage of whistles every time they attacked.

After making a bright start in the pyrotechnically-created gloom and seeing Eintracht lose experienced Austrian defender Martin Hinteregger to injury, West Ham lost Cresswell to his second red card of the Europa League campaign and the tie took a fatal turn in Frankfurt’s favour.

Filip Kostić curled the resulting free-kick narrowly wide, but it would not be long before Frankfurt made their numerical advantage count.

Moyes sent on Ben Johnson for Manuel Lanzini in a bid to strengthen his defence, but first-leg goalscorer Ansgar Knauff found space down the left before cutting back for Borré to score from 12 yards.

West Ham continued to carry a threat, most notably from set pieces, and Kurt Zouma went close to equalising before half-time, but his bundled effort from Bowen’s free-kick was cleared off the line by home captain Sebastian Rode.

Into the second period and the game continued to follow the same pattern, with Frankfurt having the majority of the ball and the Irons trying to hit them on the break or from set plays.

Unsurprisingly, Eintracht had the majority of the chances, too, with Areola saving from Borré and Djibril Sow and Daichi Kamada dragging wide and Kostić firing over the crossbar.

West Ham then fashioned their best chance of the night on the hour-mark, but Dawson’s header from Antonio’s left-wing cross bounced too close to Trapp.

Twelve minutes later, the tireless Antonio appeared on the right, burst past Evan N’Dicka and crossed low and hard, but a diving Trapp diverted the ball away from the onrushing Bowen and Tomáš Souček. The No9 had an even later chance, too, but the goalkeeper was equal to his right-foot shot. Souček then headed a Bowen corner narrowly wide in the final minute of the 90, before the latter also saw a shot held by Trapp and fired another into the side-netting. 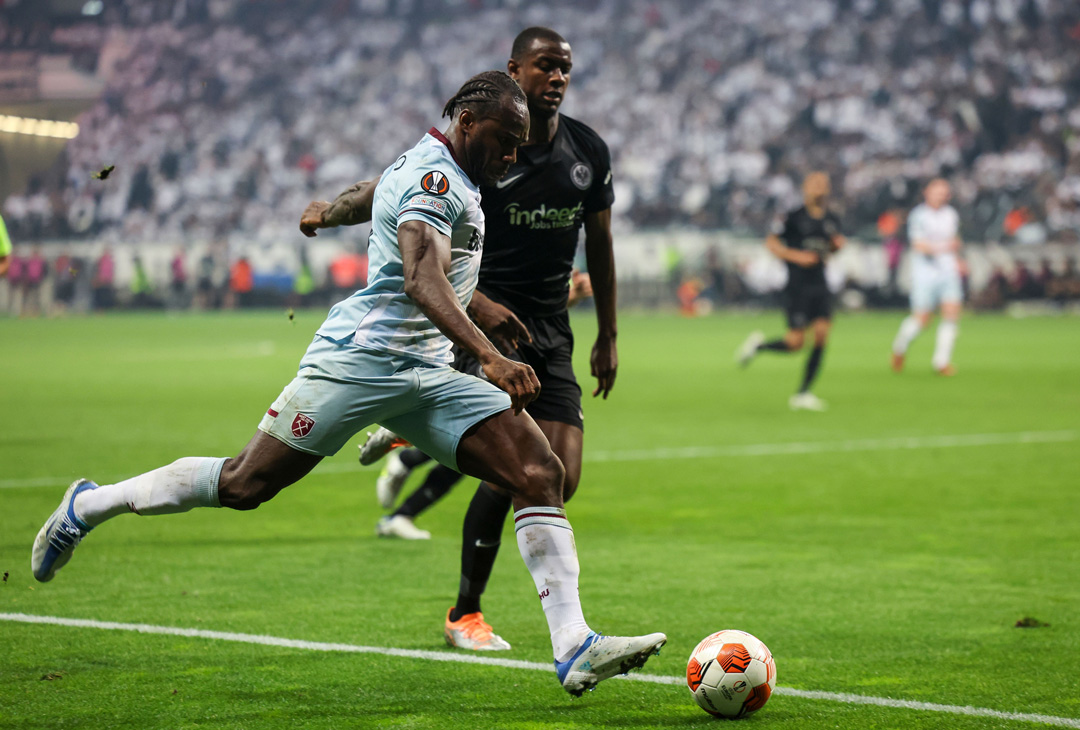 Having seen his team lose a first leg they arguably should have won and lose Cresswell early in the second, the manager’s frustration resulted in he too being shown a red card by referee Manzano with 12 minutes to play, after the ball was not returned quickly for a West Ham throw-in.

It was an unfortunate end to a wonderful run for the Hammers which began in Croatia last September, made stops in Belgium, Austria, Spain, France and Germany, and saw the Club return to prominence on the European stage.

Now, the challenge for Moyes is to raise himself and his players to finish the Premier League season strongly and return to continental competition next season.