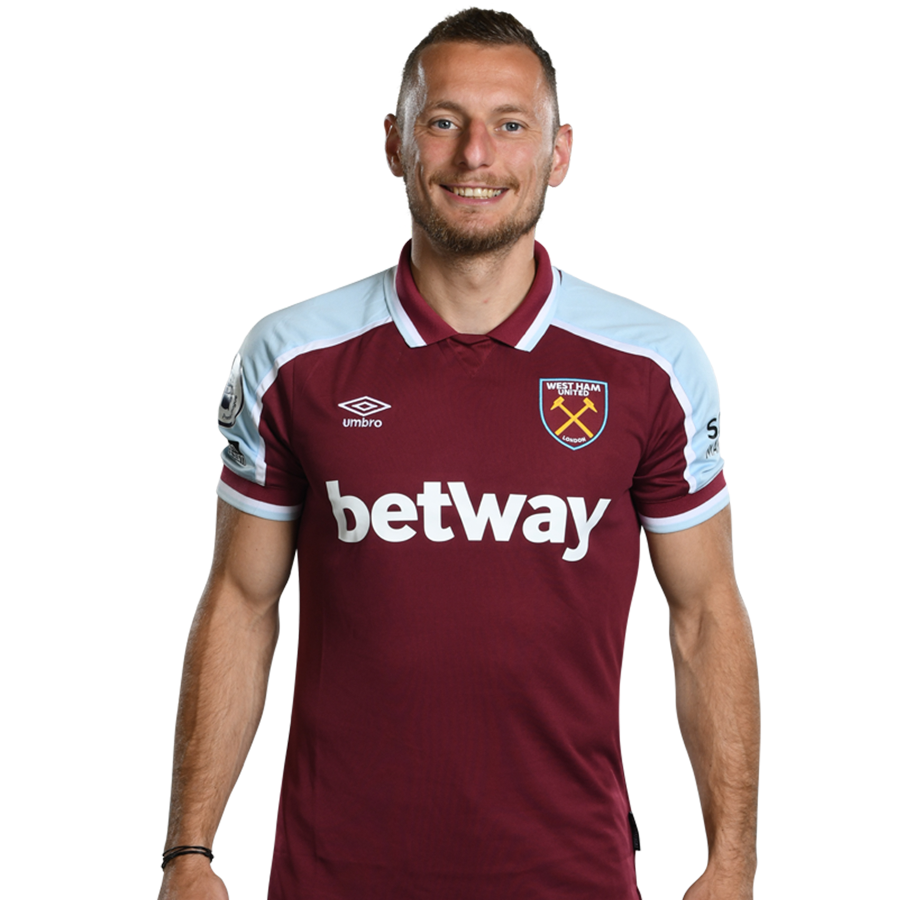 Vladmir Coufal became the second player to join West Ham United from Slavia Prague in 2020 when he moved to London Stadium in October.

The Czech Republic right-back followed his friend and countryman Tomas Soucek to east London, putting pen-to-paper on an initial three-year deal, with the option for a further two years.

Awarded the Silver Medal of Jan Masaryk by the Czech Ambassador to the UK, Libor Sečka for helping improve relations between the two countries on 8 August 2021...Started West Ham United's first seven Premier League matches, providing an assist for Michail Antonio in the 4-1 home win over Leicester City on 23 August 2021...Assisted the opening goal for Antonín Barák in Czech Republic's 7-0 friendly win over Kuwait on 11 November 2021...Assisted Saïd Benrahma's first goal in a 2-2 UEFA Europa League Group draw at KRC Genk - his European debut for West Ham United...Assisted Jarrod Bowen's equaliser in the 3-2 Premier League win over Chelsea at London Stadium on 4 December 2021...Assisted Jarrod Bowen again in the 2-0 home Premier League win over Norwich City on 12 January 2022...Assisted Jarrod Bowen's equaliser in the 2-1 home Premier League defeat by Arsenal on 1 May 2022...Finished the season with five assists and kept nine clean sheets in 34 appearances in all competitions...Finished third behind Patrick Schick and Tomáš Souček in the Czech Footballer of the Year award voting.

Joined West Ham United from Czech champions Slavia Prague on 1 October 2020...Debuted in the 3-0 victory at Leicester City on 4 October 2020...His cross led to a Davinson Sanchez own-goal in the 3-3 Premier League draw at Tottenham Hotspur on 18 October 2020...Assisted Michail Antonio's overhead kick in the 1-1 home draw with Manchester City on 24 October 2020...Started Czech Republic's UEFA Nations League wins over Israel and Slovakia in November 2020...Grabbed his second Premier League assist by crossing for Sebastian Haller's sensational overhead kick in the 1-1 home draw with Crystal Palace on 16 December 2020...Assisted Jarrod Bowen's opening goal in the 2-1 home win over West Bromwich Albion on 19 January 2021...Started the Czech Republic's 2022 FIFA World Cup qualifiers with Belgium and Wales in March 2021...Registered assists four and five of the Premier League season in the 3-2 wins over Wolverhampton Wanderers and Leicester City in April 2021, setting up Jesse Lingard to score in both matches...Added a sixth top-flight assist when Michail Antonio headed in his cross at Burnley on 3 May 2021...Finished the season with a seventh assist - second only to Aaron Cresswell's eight in the Hammers' assist rankings - when Pablo Fornals converted his cross in the final-day 3-0 home win over Southampton on 23 May 2021...Ended his first season at the Club with 34 Premier League appearances and seven assists...Named in the Czech Republic squad for the delayed UEFA Euro 2020 finals and started the warm-up defeat in Italy on 4 June 2021.

Born in the city of Ostrava in the far east of Czech Republic in August 1992...Began his career with FC Hlučín, debuting in a 2. Liga fixture at Dukla Prague in September 2010, just four weeks after his 18th birthday...Spent the 2011/12 season on loan with 2. Liga club Opava...Was signed by First League club Slovan Liberec, where he spent six seasons, winning the Czech Cup in 2015 and making more than 150 appearances, including 27 in the UEFA Europa League...Rewarded for his consistently impressive performances with a senior international debut for Czech Republic, starting his country’s 1-0 friendly win in Qatar in November 2017...Signed by one of Czech Republic’s two biggest clubs, Slavia Prague, in 2018...Completed a domestic double in 2018/19 and secured a second straight First League title in 2019/20...Made his competitive debut for his country in September 2019, starting a 3-0 UEFA Euro 2020 win in Montenegro and keeping his place for the outstanding 2-1 victory over England the following month.