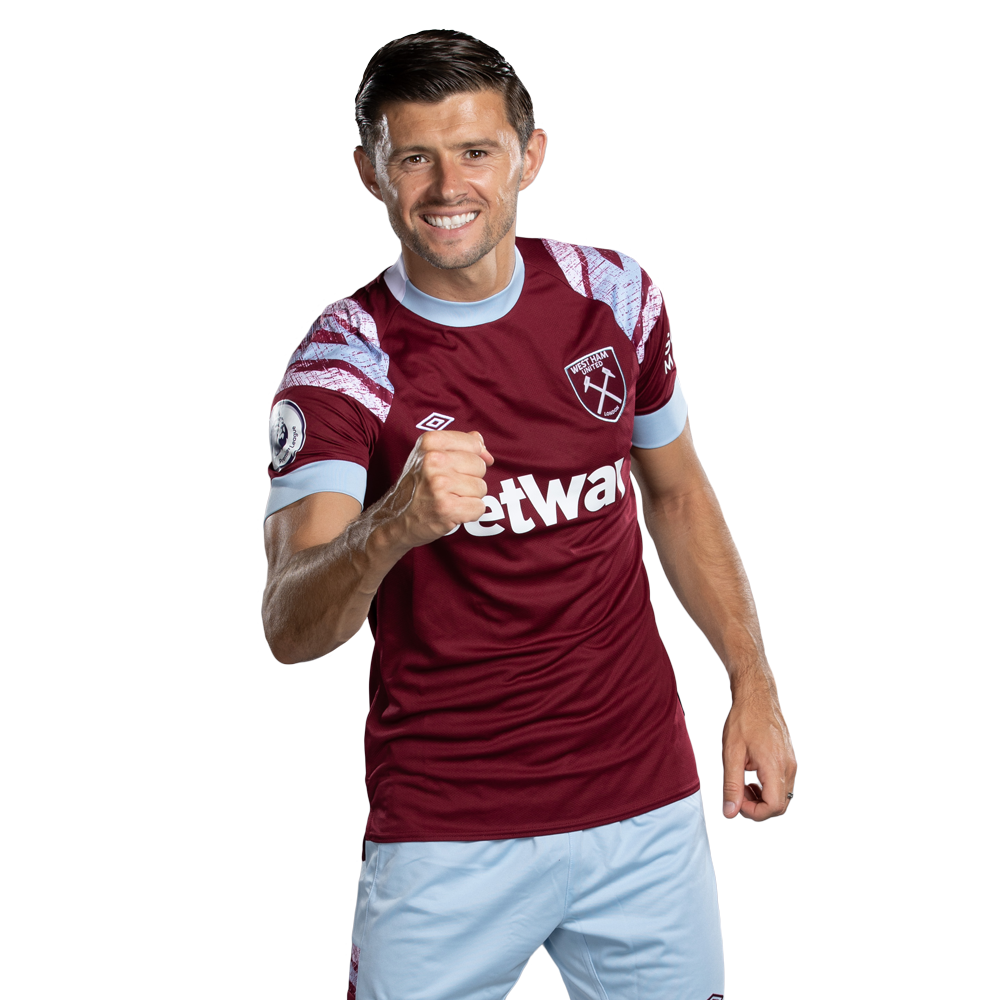 Born in Liverpool, Cresswell began his career with Tranmere Rovers before moving to Portman Road in 2011. He then enjoyed three outstanding seasons in the Championship with the Tractor Boys, making nearly 150 appearances and earning Player of the Year honours in 2012.

After being named in the 2013/14 PFA Championship Team of the Year, Cresswell stepped up to the top flight by signing for the Hammers. He celebrated by winning the Hammer of the Year award at the end of his first season in east London, before making his England debut against Spain in November 2016.

Scored his first goal of the season in the 4-2 opening-day Premier League win at Newcastle United on 15 August 2021...Registered assists for Craig Dawson and Issa Diop to score headers in the 3-0 home UEFA Europa League Group H win over KRC Genk on 21 October 2021...Assisted Michail Antonio's winner from a corner in a 1-0 home Premier League victory over Tottenham Hotspur on 24 October 2021...Grabbed an assist for Saïd Benrahma's goal in the reverse UEFA Europa League Group H fixture at KRC Genk on 4 November 2021, which ended 2-2...Assisted Jarrod Bowen's header in the 3-2 home Premier League defeat by Leeds United on 16 January 2022...Assisted Jarrod Bowen's last-gasp FA Cup fourth-round winner at Kidderminster Harriers on 5 February 2022...Registered his seventh assist of the season with a free-kick headed in by Craig Dawson in the 1-1 home Premier League draw with Newcastle United on 19 February 2022...Scored his second goal of the season with a direct free-kick in the 2-1 Premier League win over Everton at London Stadium on 3 April 2022...Sent-off in the UEFA Europa League quarter-final first leg draw with Olympique Lyonnais at London Stadium on 7 April 2022...Sent-off in the UEFA Europa League semi-final second leg defeat at Eintracht Frankfurt on 5 May 2022...Finished the season with two goals, seven assists and kept 12 clean sheets in 42 appearances in all competitions.

Played every minute of the opening half of the Premier League campaign...Registered two assists in the 3-0 win at Leicester City on 4 October 2020, then followed it with a third in the 3-3 draw at Tottenham Hotspur a fortnight later...Made if four assists for the season by setting up Angelo Ogbonna's winner at Leeds United on 11 December 2020 - his 200th Premier League appearance for the Club...Registered a fifth Premier League assist by providing the free-kick for Tomas Soucek's second in the 3-2 win at Crystal Palace on 26 January 2021...Made it six Premier League assists for the season when Issa Diop headed in his corner in the 3-0 home win over Sheffield United on 15 February 2021...Added a seventh top-flight assist when Craig Dawson converted his corner in a 2-0 home victory over Leeds United on 8 March 2021...Made it eight Premier League assists for 2020/21 in the 3-1 win at West Bromwich Albion on 19 May 2021 - his 250th appearance for the Club - when his corner was headed in by Angelo Ogbonna...His eight assists were the highest of any Premier League defender and Cresswell's highest in any season as a Hammer.

Suffered a calf injury in training which ruled him out of all but the last of West Ham United's pre-season fixtures...Made his first competitive appearance of the season in the 3-1 EFL Cup second-round win at AFC Wimbledon on 28 August 2018...Captained West Ham United for the first time in the 2-1 Premier League win at Southampton on 27 December 2018...Totalled 20 Premier League appearances, including 18 starts.

Called up by England for the 2018 FIFA World Cup qualifiers with Slovakia and Malta in August/September 2017...Called up again by his country for the Three Lions' final two 2018 FIFA World Cup qualifiers with Slovenia and Lithuania in October 2017, making his competitive debut in the latter...Grabbed his first assist of the Premier League season in the 2-2 draw at Crystal Palace on 28 October 2017...Added further assists at Manchester City and AFC Bournemouth either side of Christmas...Reverted to a new role on the left side of a three-man defence in the 2-1 Premier League defeat at Manchester City on 3 December 2017...Assisted Andy Carroll's first in a 2-1 Premier League win over West Bromwich Albion at London Stadium on 2 January 2018 before making it five for the season with a cross for Marko Arnautovic to clinch a 2-0 home victory over Watford on 10 February 2018...Became a father for the first time, to Sonny, on 16 January 2018...Scored his first goal of the season with a spectacular free-kick in the 4-1 home defeat by champions Manchester City on 29 April 2018...Totalled 36 Premier League appearances and 39 overall - 38 starts - one goal and seven assists.

Suffered a knee ligament injury in a pre-season fixture with German side SC Karlsruher in Austria in July 2016...Returned to set up Manuel Lanzini's Premier League winner at Crystal Palace on 15 October 2016...Was sent-off later in the same game for two bookable offences...Received his first senior England call-up in November 2016...Made his England debut as a substitute in a 2-2 friendly draw with Spain at Wembley on 15 November 2016...Made his 100th appearance for West Ham United in the 4-1 Premier League win at Swansea City on Boxing Day 2016...Totalled 29 appearances in all competitions, including 26 in the Premier League...Made his second England appearance as a substitute in the 3-2 friendly defeat in France on 13 June 2017.

Continued as the Hammers' starting left back at the start of the 2015/16 season...Played every minute of the side's first 17 Premier League fixtures, setting up goals against AFC Bournemouth, Liverpool and Chelsea...In the 18th, smashed home the opener in the 1-1 Boxing Day draw at Aston Villa from the edge of the box...Missed the next match against Southampton, but played every minute in the rest of the Hammers' campaign in all competitions...Put in impressive performances in Premier League wins over Liverpool, Tottenham Hotspur, Everton and Manchester United...Scored a cracker to put the Hammers ahead in their 2-2 draw at eventual champions Leicester City at King Power Stadium on 17 April 2016...Appeared in 37 of 38 matches as the Hammers finished seventh in the Premier League, their highest finish for 14 years...Totalled 47 appearances and two goals in all competitions.

Joined West Ham United on a four-year contract on 3 July 2014...Immediately settled into the first team at left-back, starting in the season opening defeat to Tottenham Hotspur on 16 August 2014...Scored his first goal for the Club against Newcastle United as the Hammers won 1-0 at the Boleyn Ground on 29 November 2014...Started all 38 Premier League matches for the Hammers as Sam Allardyce's side finished 12th...Started all four FA Cup ties as the Hammers beat Everton (after a replay) and Bristol City to reach the fifth round...Voted Hammer of the Year and Players' Player of the Year at the end of his debut season in Claret and Blue...Was rewarded for his form and consistency with a new long-term contract in June 2015.

A consistently impressive performer who was long been linked with a move to the Barclays Premier League, Cresswell joined Tranmere as a schoolboy before making his first-team debut at 18 in November 2008...The 5'7" full-back played 80 times for the Prenton Park side over three seasons, scoring six goals, before moving up a division to Ipswich in summer 2011...An outstanding debut season for the Suffolk club saw Cresswell voted Ipswich's Player of the Year for 2011/12....He followed that with two further impressive campaigns during which he missed just four league matches - two of those through suspension and two through injury...In 2013/14, his outstanding all-round displays saw Cresswell voted into the Championship Team of the Year by his fellow professionals.