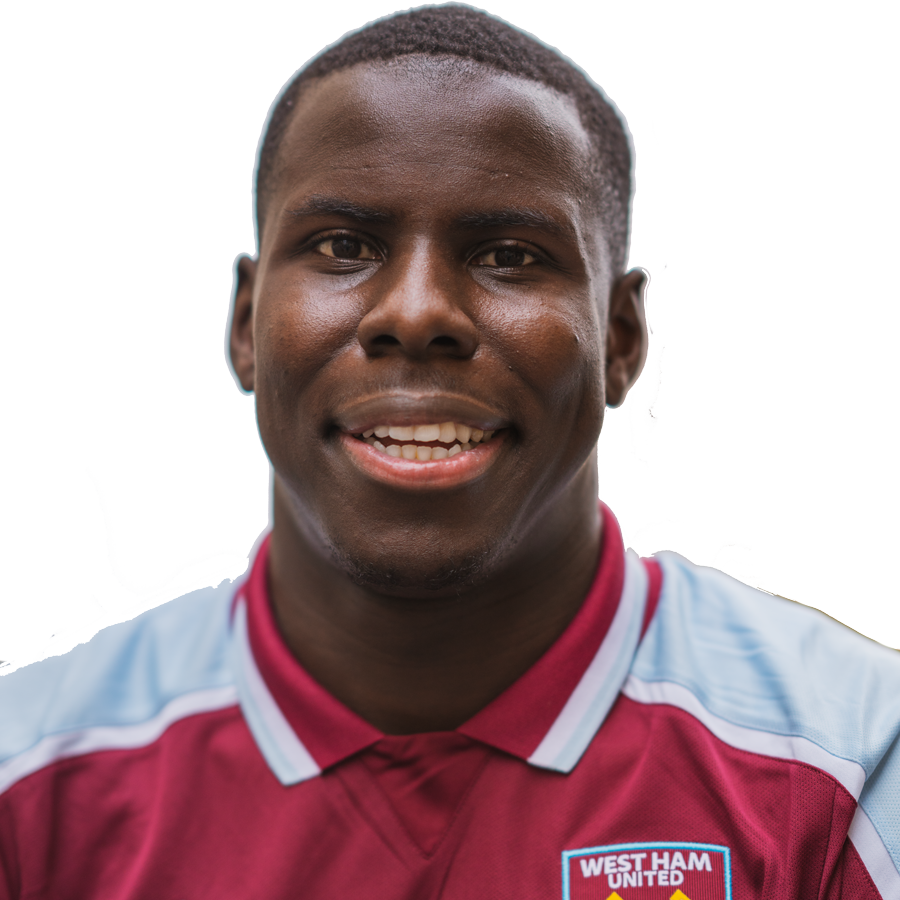 Capped by his country at senior level, the Lyon-born Zouma brought experience and leadership to the West Ham defence, helping the Irons reach the UEFA Europa League semi-finals in his first season in Claret and Blue.

​Born in the French city of Lyon to immigrants from the Central African Republic...Started his career as a nine-year-old at local Fifth Division side FC Valux-en-Velin...Continued at Le Pôle Espoirs Football de Dijon, an academy run in conjunction with the French Football Federation...Had his prodigious potential identified by Saint-Étienne, who signed him as a 15-year-old in 2009...Penned a first professional contract at the end of the 2010/11 season...Initially played without a name on his shirt to shield him from media attention...Made his professional debut at just 16 on 31 August 2011, playing the full 90 minutes of Saint-Étienne’s 3-1 Couple de la Ligue win over Bordeaux...Made his Ligue 1 debut in September 2011 at Lorient...Scored his first professional goal in November 2011 in a 2-0 win over Nice...At 18, played the full 90 minutes of Saint-Étienne’s 1-0 win over Rennes in the 2013 Coupe de la Ligue final...Playing alongside Alphonse Areola, was part of the France side that won the the 2013 FIFA U-20 World Cup in Turkey, starting every game from the final group fixture onwards and scoring in the quarter-finals against Uzbekistan...Made his debut in European competition in a 3-0 win over Moldovan team Milsami on 8 August 2013...Signed for Chelsea on transfer deadline day in January 2014, before immediately returning to Saint-Étienne on loan for the remainder of the season...In September 2014, made his first competitive appearance for Chelsea, scoring the opening goal in a 2-1 win over Bolton Wanderers in the EFL Cup, before making Champions League and Premier League debuts the following month, the latter in a 1-1 draw at Manchester United...Earned his first Premier League winner’s medal with Chelsea in his debut campaign, 2014/15...Demonstrated his versatility in successfully man-marking Christian Eriksen as a defensive midfielder in their 2-0 win over Tottenham in the 2015 EFL Cup final...Called up to the senior France squad for the first time in March 2015...Made his senior France debut at his former club ground – Saint-Étienne’s Stade Geoffroy-Guichard – as a substitute against Denmark in March 2015, but saw his progress halted by an injury which ruled him out of the 2016 UEFA European Championship finals in his home country...Returned to earn nine appearances – and another winner's medal – in Chelsea’s successful 2016/17 Premier League campaign...Two seasons of regular first-team football and 73 appearances on loan at Stoke City and Everton granted him the opportunity to reassert himself in England’s top-flight, leading to his first start for France in June 2019 – an occasion Zouma once again marked with a goal in a 4-0 win over Andorra...Made 36 appearances in all competitions for Chelsea in 2020/21, winning the UEFA Champions League...Signed off his career with Chelsea by winning the 2021 UEFA Super Cup before making his switch from west to east London.​