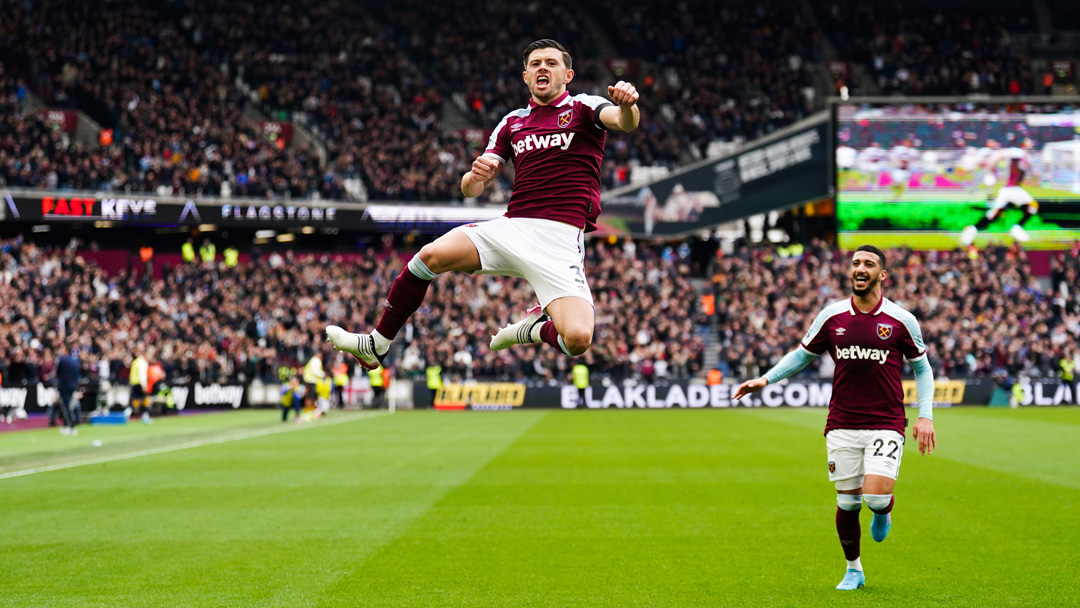 West Ham United returned to the Premier League’s top five and recharged their challenge for European qualification with an eventful 2-1 victory over Everton at London Stadium on Sunday.

As it was, West Ham’s first goal from a direct free-kick since Cresswell netted against Manchester United 101 games ago in September 2019 and a trademark counter-attack led by Michail Antonio and converted by Bowen broke Everton’s spirited resistance and lifted the hosts back above Tottenham Hotspur – who welcomed Newcastle United later on Sunday – Manchester United and Wolverhampton Wanderers.

Academy of Football graduate Lampard’s Everton, meanwhile, are now 12 away top-flight matches without a win and remain nervously looking over their shoulders in 17th place.

The former West Ham and England midfielder may feel his team’s performance warranted more, but once Keane had been red carded for two bookable offences by referee Michael Oliver with 25 minutes remaining, the visitors’ challenge subsided.

Earlier, the two sides had traded blows in what was a largely even first half, with West Ham controlling the majority of possession and Everton playing on the break using the pace of Richarlison, Demarai Gray and Alex Iwobi.

Keane blocked shots from Pablo Fornals and Antonio, while Craig Dawson and Ryan Fredericks did likewise to deny Richarlison inside the opening ten minutes, while Bowen shot straight at Jordan Pickford from distance.

The alert Pickford also did well to close down Fornals, but he could do nothing to keep out Cresswell’s inch-perfect opener on 32 minutes.

Fredericks had used his speed to deny Richarlison moments earlier and the intervention proved crucial when Holgate – a late replacement for warm-up injury victim Donny van de Beek – fouled Bowen and Cresswell stepped up to curl his free-kick into the top right-hand corner. The boyhood Liverpool fan celebrated in front of the Everton fans before being mobbed by his jubilant teammates.

The Blues were momentarily rattled, with Keane being shown a yellow card for hauling down Antonio, and that decision would prove costly when the England centre-back fouled the same player in the second half and was given his marching orders by referee Oliver.

In between the two bookings, Everton had their best period of the match either side of half-time. Richarlison skimmed the crossbar with one effort before the break, then Dominic Calvert-Lewin clipped the woodwork with a rising shot shortly after it.

The Blues’ improvement was finally rewarded on 53 minutes when Łukasz Fabiański’s punch from a corner dropped to Richarlison. The Brazilian poked the ball back to Holgate, whose shot took a decisive deflection off Fornals and span into the bottom right-hand corner.

But, just when it looked like the Blues would take control, a loose touch from Iwobi allowed Fornals to release Antonio. The No9 raced into the Everton penalty area and forced Pickford to parry the ball into the path of Bowen, who marked his return from four games out with a heel injury with a clever right-foot finish over the sliding Vitalii Mykolenko.

Having now scored 50-plus Premier League goals in consecutive seasons for the first time, the Irons' attentions turn back to the UEFA Europa League, with French side Olympique Lyonnais the visitors to London Stadium for a quarter-final first-leg tie on Thursday evening!