Michail Antonio: We want to finish the season on a high

MIchail Antonio knows there remains plenty to play for, as West Ham United bid for European football in their closing three games of their Premier League season.

The Hammers’ joint top-scorer made 29 appearances in 2015/16, the last occasion on which the Irons sustained a comparable challenge over a campaign.

On that occasion, however, despite being as high as fifth in the table with three games left to play, defeats to two lower-ranking teams saw then-manager Slaven Bilic's team slip into seventh position – despite recording the Club’s highest-ever Premier League points total (62).

That is a figure David Moyes' Hammers are only four away from surpassing and – up against three of the Premier League’s bottom seven teams in their remaining games – Antonio is determined to only ascend the table this time.

West Ham go into Saturday evening’s game at Brighton & Hove Albion possessing the Premier League’s strongest record against teams outside of the traditional ‘Big Six’ – a statistic not lost on Antonio.

“We believe that, coming into these last three matches, they are must-win games for us because, mathematically, we’re not ruled out of the Champions League and are in a good position to get into Europe.

“Obviously, we want to finish the season on a high because it’s been an unbelievable one, so we need to be professional until the end.”

A mitigating factor in West Ham recording three defeats in their last four league games has been the numerous unfortunate injuries to their first-team squad.

Yet despite missing a number of key players, the Irons have continued to play well, fighting back from two goals down with ten men against Newcastle and having almost 70 per cent of the possession against Everton.

“We’ve not played badly at all,” Antonio admitted, “and we’ve had quite a few injuries as well. We’ve had injuries all the way through the season.

“Over the last four games we’ve picked up a big amount – I, Angelo Ogbonna, Aaron Cresswell, Arthur Masuaku, Declan Rice and Andriy Yarmolenko have all been out – and we haven’t got a massive squad, so we can’t afford to have so many players missing.

“That’s affected our results over the last four games, but we’ve got players coming back, so we’re going strong into the last few games.” 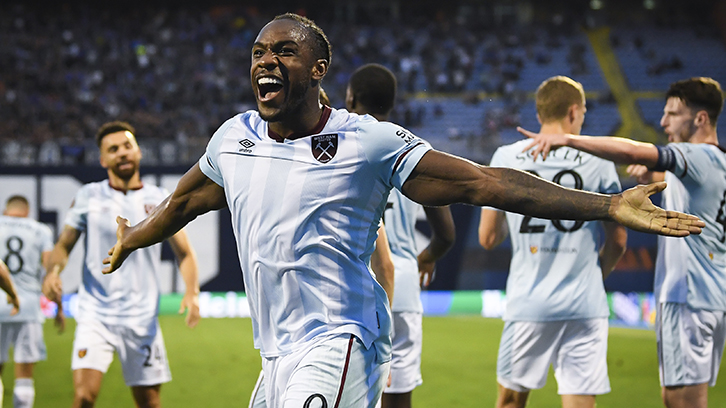 Saturday’s opponents at the Amex Stadium are Brighton & Hove Albion, a team whose attractive brand of football has certainly caught the eye this season.

Graham Potter’s side secured Premier League safety following Fulham’s defeat to Burnley on Monday, with Antonio intrigued to see whether that will influence the dynamic of Saturday’s contest.

He explained: “Brighton have played unbelievable football all season, they’ve just not had that finishing touch sometimes.

“Now they’re safe, it’s one of those games where it’s a weird one – we don’t know whether they’re going to be more relaxed, or they’re going to come into a game where they’ve got no pressure on them, and can be a freely attacking team.

“We’re going to go there, be professional, and do the job that needs to be done.”

Part of Antonio’s job these days involves scoring goals – and it is not lost on the 31-year-old that just three more goals this season would see him complete a historic achievement.

“I’ve been here for six years now and played right-back, on the wing, left-back… a lot of positions!” Antonio reflected.

“For two seasons now, I’ve been a striker, and for someone who’s not really had much of an opportunity being up front, to say I could become the all-time top Premier League goalscorer, in the amount of games I’ve played there, is just unbelievable.

“There are some very good strikers and some very good names in that list. For me to become our all-time top Premier League goalscorer would be a great achievement.

“That’s the type of thing I love, making history… and it would just add to my list!”