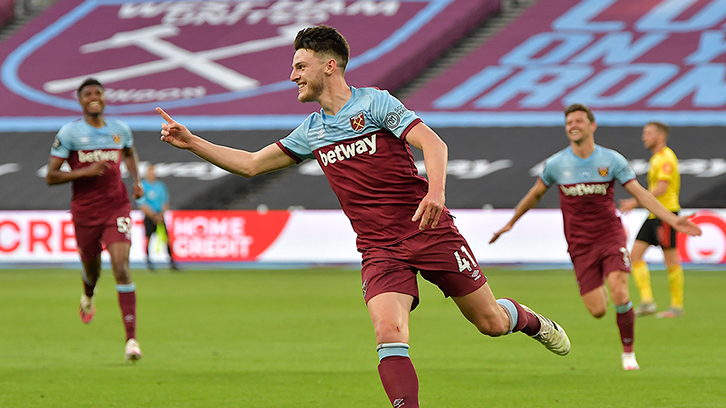 Two goals in the opening ten minutes - the first a well-taken Michail Antonio finish, the second a thumping close-range header from Tomas Soucek - were just reward for an impressive start from the home side.

Those goals - added to by Declan Rice's exquisite long-range strike - gave the Hammers the perfect platform to go on and win the game, despite Troy Deeney's consolation goal for Watford early on in the second half.

The result marked the Irons' first back-to-back Premier League wins since August and, with just two games to go, put six points between themselves and the teams in the Premier League drop zone - West Ham also boasting a significantly superior goal difference to their name.

The team news beforehand was dominated by David Moyes’ selection of Mark Noble in the centre of the park, the captain making his 500th appearance for his boyhood club with plenty to play for against the visitors.

His teammates set out to make it an evening to remember.

Having made a habit of starting sharply in recent weeks, the Hammers repeated the trick again on this warm summer’s eve, striking twice against a shell-shocked Watford side in quick, early succession.

Six minutes in, Jarrod Bowen charged down a Watford clearance, his block bobbling up towards Tomas Soucek. The Czech Republic man miscued but, after Pablo Fornals turned the ball round the corner, it ran into Antonio’s path – and the No30 made no mistake with a powerful low finish past Ben Foster.

Four minutes later, the Irons were elated once more. Watford afforded Bowen plenty of time on the right flank and the No17 made them pay. Cutting in, his in-swinging cross was on the money, with Soucek superbly twisting his body to dive and head past Foster from six yards.

Watford tried to hit back immediately when Ismaiala Sarr broke down the right and shot low at Fabianski’s near post, but the Pole was down quickly to block with his legs, with Ogbonna well-positioned to block Cleverley’s attempted follow-up.

The Irons were able to see out the first quarter with a degree of comfort, however, sticking to their task with determination as Watford began to go direct with increasing regularity.

That pressure began to mount soon after, but crucial interventions from Issa Diop and Ogbonna – the former a strong defensive header under pressure, and the latter a superbly timed sliding tackle when Welbeck looked to have gone past him – kept the Hornets at bay.

Then, a thunderbolt. A bolt from the Claret and Blue. A marvellous goal.

Nothing much seemed to be on when Declan Rice picked up the ball from a short corner, wide out on the left – so the midfielder went for the spectacular, unleashing a wickedly arching 25-yard strike into the far corner, a contender for the Hammers’ goal of the season.

West Ham's solid defence continued to hold firm from that moment, Watford’s best chance coming in first-half injury time when Craig Dawson won a rare header inside the home team's area, but he could not direct it under pressure from Diop.

In the second half, it was Watford who made a quick start of their own, with Troy Deeney tucking in a rebound after Abdoulaye Doucoure’s surging run down the left led to the midfielder hitting the post with a low shot.

The Hammers admittedly struggled to clear their lines in the quarter of the game thereafter, Watford’s direct passing often putting the West Ham back line under the cosh.

Their most regular outlet – Bowen’s desire to drive at defenders with the ball at his feet – won West Ham their only real shooting opportunity in that period, a 25-yard free-kick from Aaron Cresswell which was blocked by the wall.

But the Irons picked up again after the second-half drinks break, stemming the Hornets’ momentum – and, as against Burnley a week ago, West Ham substitute Sebastien Haller came within inches of scoring with his first touch off the bench.

When the ball looped up from a loose header, Haller – spotting Foster off his line – went for the dipping first-time volley on the stretch, only for Foster to scramble back and push the ball over his bar with his fingertips; an excellent effort, and a save to match.

Watford continued to push forwards in search of a route back into the match, Welbeck's finish from Sarr's low cross somehow clearing Fabianski's crossbar at point-blank range.

West Ham held firm and a vital win was marked at full-time by jubilant scenes from those in Claret and Blue, Noble collapsing on the pitch as his teammates huddled around him.

The Irons' top-flight status is all but mathematically secure at this stage, and the Captain's exemplary influence on his boyhood Club was once again plain to see for all watching events in east London.