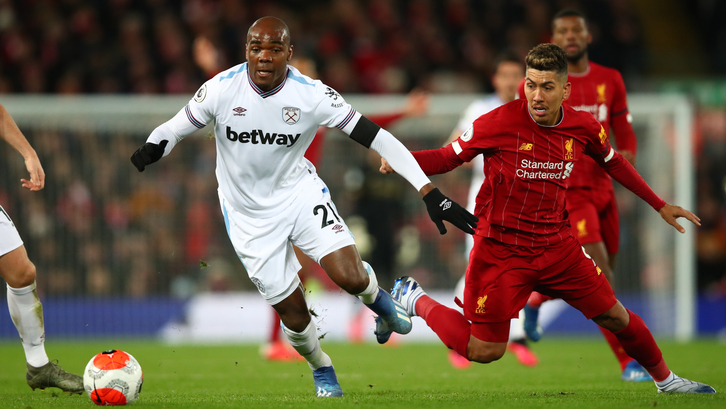 A gallant effort from West Ham United away to Premier League leaders Liverpool ultimately went unrewarded as the Irons fell to a 3-2 defeat.

Georginio Wijnaldum had given the home side the lead before Issa Diop’s third goal in six Premier League games levelled the contest just a few moments later.

Substitute Pablo Fornals gave West Ham the lead on 52 minutes with a clinical finish, but the Reds fought back to take all three points through Mohamed Salah and Sadio Mane’s second-half strikes.

It was the home side that drew first blood on a brisk but bright evening at Anfield. Having warned of their attacking intent through Andrew Robertson’s powerful effort on six minutes, Liverpool took the advantage three minutes later.

The Hammers had done well to deny Liverpool their initial attempts, but Trent Alexander-Arnold’s deep cross was met by Wijnaldum. The ball headed goalwards and, despite Lukasz Fabianski getting a hand over, it found the back of the net.

The away side looked to battle back immediately, earning a trio of corners in quick succession. The last of the three was whipped in impeccably by Robert Snodgrass. Up rose Diop, beating his man, and sending his header past Alisson to level the match.

West Ham continued to threaten from set-pieces. Another Snodgrass corner was somehow not met by a Hammers head, before Michail Antonio ran through one-on-one, only for Alisson to claim the ball.

It looked as if Diop would get a second, after Tomas Soucek turned a corner towards the Frenchman. The defender challenged for the second ball but was the linesman found him to be offside.

Liverpool captain Virgil van Dijk had a header of his own strike the cross-bar, meaning the scores were level at the interval.

There as a substitution just two minutes into the second period for the Hammers, with Fornals replacing Soucek, and the Spaniard’s introduction was more than justified just a few moments later.

West Ham enjoyed a passage of possession, before Mark Noble found Declan Rice on the right-flank. The England international turned and whipped in a cracking cross, which Fornals buried at the far post. The Irons had the lead at the Premier League leaders.

Ngakia made a sublime last-ditch tackle to deny Mane, before Fabianski turned away an Alexander-Arnold strike from distance with a fingertip save.

Having experienced the thrills of taking the lead, there was heartbreak on 69 minutes. Robertson squared the ball inside the area to Salah. The Egyptian turned an effort on goal, albeit one that lacked power, but somehow the shot found its way under Fabianski and into the net.

Fabianski would expertly deny a volleyed Salah effort not long after to keep the game level, but the home side would get the lead less than ten minutes from time. A floated ball back into the box landed kindly for Alexander-Arnold, who lofted it across to Mane to tuck in.

Mane thought he had managed to score again, only for VAR to rule the goal out for offside, before January signing and late substitute Jarrod Bowen had a shot somehow kept out by Alisson.

Despite the late pressure by the away side, there was no third goal for David Moyes’ side, with the Irons unable to take points from the league leaders.