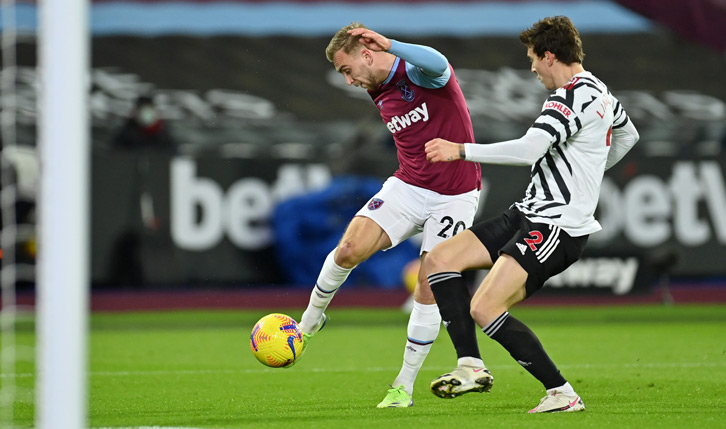 On an evening where the return of supporters to London Stadium for the first time in over nine months was celebrated, it was a tale of two halves on the pitch for the Hammers. Tomas Soucek had given the home side a more than deserved lead on 39 minutes, after a first period in which Pablo Fornals also hit the post and the Irons dominated the play.

Manchester United were fortunate to not be more than a goal behind at the half-time interval and called on Bruno Fernandes and Marcus Rashford from the bench for the second period. The duo played a crucial role in the Red Devils taking the lead, with Fernandes setting up Paul Pogba for the leveller, and Rashford tucking home their third after Mason Greenwood’s finish.

Defeat spelled an end to a three-match winning run for David Moyes’ team, in only the Irons third loss in eleven Premier League matches this season.

A return to London Stadium for 2,000 West Ham United supporters meant the home side was met with an outpour of support from the lucky fans in attendance as they took to the pitch for Saturday’s Premier League clash.

The returning 2,000 were very nearly treated to the perfect opening to the match too, with the Hammers very much on the front foot in the early exchanges. Jarrod Bowen, in particular, looked dangerous, turning Alex Telles inside-out before playing the ball into Pablo Fornals. The Spaniard’s close-range effort was denied by Dean Henderson.

The January signing, who scored in the winner in the 2-1 victory over Aston Villa on Monday, thought he might have given West Ham the lead on nine minutes when he latched onto a through-ball and coolly slotted past Henderson. However, the linesman’s flag then went up, with replays showing Bowen was comfortably offside in the build-up.

Seemingly awoken by the ruled-out finish, Manchester United grew into the game and started to claim more possession in the middle third of the pitch, albeit without threatening Lukasz Fabianski’s goal.

Comfortable, the Irons looked to press again. The impressive Bowen looked a man on a mission, placing an inch-perfect cross onto Fornal’s forehead. The Spaniard’s resulting effort was into the side netting.

Moments later, Fornals again went close, this time toe-poking an effort through Aaron Wan-Bissaka’s legs, leaving Henderson stranded. The ball struck the base of the post, rebounding into the grateful hands of the Manchester United goalkeeper.

The Irons would not be denied however and, pushed on by a thunderous chorus of reinforcement from the supporters in the Billy Bonds Stand, the home side got the deserved lead seven minutes before half-time.

West Ham’s second corner of the evening, whipped in expertly by Aaron Cresswell, was flicked on by Declan Rice. Unmarked at the back, Soucek guided the ball into the net, and the team was treated to the roar of West Ham fans celebrating a home goal at London Stadium for the first time in 280 days.

The Hammers were unfortunate to not be two, or even three, ahead at half time and, perhaps in recognition of that, Manchester United introduced Fernandes and Rashford from the bench at half-time.

Nonetheless, the first chance of the second period fell to the Irons and David Moyes’ side will be disappointed to have not doubled their advantage. Sebastien Haller picked out Vladimir Coufal’s late run on the right flank, who had driven into space. The full-back looked to pick out Bowen across goal, but the winger could not find the net from his narrow angle.

With the Hammers only a goal up, there was always the risk of the Red Devils bouncing back, and they did that just after the hour mark. Henderson’s long punt forward was collected by Fernandes. The Portugal playmaker laid off Pogba, who curled home from distances. Despite a VAR check on the ball going out of play, the goal stood.

Buoyed by their leveller, Manchester United took the lead just four minutes later. Greenwood’s first-time touch took the striker into space, with the young attacker striking his effort under Fabianski and into the corner.

Substitute Rashford then saw an effort, one-on-one, bounce away off the woodwork; a let-off for West Ham with just under 20 minutes to go in the contest. But the Manchester United No10 made no error the second time he was played through, dinking Fabianksi for his side’s third.