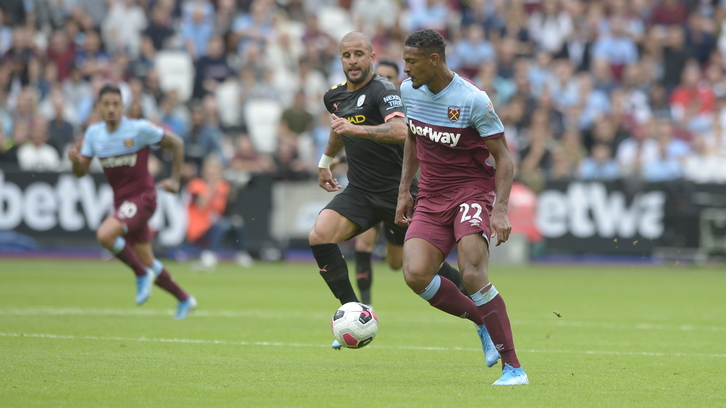 A stroke of luck gave City their opening goal on 25 minutes as Issa Diop’s clearance deflected into the net off of Gabriel Jesus, while Raheem Sterling doubled the lead six minutes into the second period.

The England winger chipped Fabianski to give City their third before substitute Sergio Aguero stroked home a penalty at the second attempt to ensure the Hammers were beaten.

Manuel Pellegrini’s side were not without their chances on an afternoon where VAR’s input was felt on numerous occasions. Diop went close with a headed effort while Chicharito and Manuel Lanzini also saw efforts well saved.

A match played in blustery conditions at London Stadium saw West Ham United’s first VAR check of the 2019/20 season made after seven minutes, after a coming together between Manuel Lanzini and Rodrigo in the City penalty area. The home players, and supporters, wanted a spot-kick, but the checks came back with a negative.

Riyad Mahrez proved to be a tricky option for the away side down the right-wing with the Algerian twice going close in the first period. An early shot was well-saved by the returning Fabianski before the winger pulled an effort wide midway through the first period.

Despite City having the clearer efforts, at no point did the Hammers look too troubled by Pep Guardiola’s reigning champions. A high press and quick decision making were working in the home team’s favour, but the Irons were desperately unfortunate to fall behind on 25 minutes.

Mahrez played in Kyle Walker on the underlap, with the England right-back getting past captain Aaron Cresswell. The City defender played in a wicked cross, which Issa Diop did excellently to block. However, the defected cross struck City striker Jesus and bounced into the net.

Hammers fans will have been happy with how their team responded with Manuel Pellegrini’s starting XI continuing to press. Club record striker Sebastien Haller attempted a spectacular overhead kick, which was saved by Ederson.

Six minutes into the second period and City had their second. Kevin De Bruyne received the ball from Mahrez, shrugged off Fabian Balbuena and played in Sterling. The City No7 finished, doubling the away side’s advantage.

Guardiola’s reigning champions thought they had a third just minutes later, as Sterling set up Jesus, but VAR was called upon and ruled Sterling had just strayed offside in the build-up, and therefore no goal was awarded.

Buoyed by City’s cancelled finish, West Ham looked to capitalise on the energy from the home fans at London Stadium. Substitute Robert Snodgrass whipped in a brilliant free-kick on the hour and Diop met the ball with a header. The Frenchman’s effort was just over the bar.

Some goalkeeping brilliance from Ederson then stopped West Ham from finding the goal. Chicharito adapted well to knee an effort towards goal, which the Brazilian somehow kept out. Manuel Lanzini was there to follow up with a header, but again City’s shot-stopper pushed the ball away.

City’s third came on 75 minutes and again VAR was involved. Mahrez found Sterling over the top with a lobbed ball, and the winger chipped his effort over Fabianski. Again, VAR checked for an offside, but this time the decision went in City’s favour.

Diop then fouled Mahrez in the area, with referee Mike Dean awarding a spot-kick. Up stepped substitute Sergio Aguero, with Fabianski superbly saving the effort. However, a VAR decision determined that Declan Rice had infringed in the box, giving Aguero a second chance. The Argentinian made no mistake the second time.

City’s win was completed in added time as Mahrez played in Sterling, who slotted home for his hat-trick.