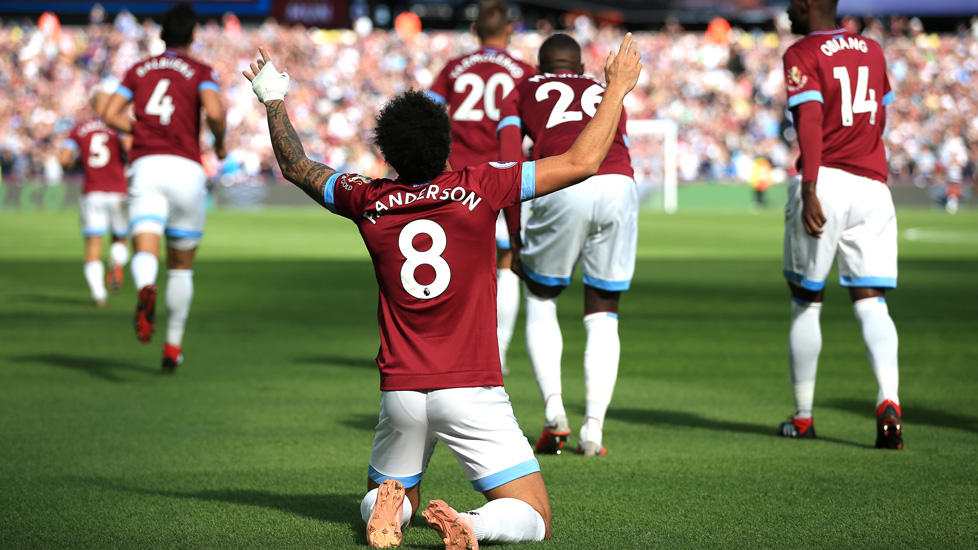 A superb afternoon of football from West Ham United saw Manuel Pellegrini’s side claim an unforgettable 3-1 victory over Manchester United.

Felipe Anderson put the Hammers deservedly in front on five minutes with a special finish, before Andriy Yarmolenko doubled the advantage moments before half-time, although his strike was credited as a Victor Lindelof own-goal.

Marcus Rashford pulled the Red Devils back into the game but his strike did little to quell an electric atmosphere at London Stadium, and the Irons went 3-1 up thanks to Marko Arnautovic’s cool finish.

West Ham began the game with fire and intensity, immediately pressing against Manchester United’s back three, and an early chance fell the way of Fabian Balbuena, who skewed his header just wide.

The Irons took a deserved early lead after just five minutes of the action. Captain Mark Noble found Pablo Zabaleta with a superb through-ball. The Argentinian’s low cross was met at the near post by Felipe Anderson, who cleverly and wonderfully flicked the ball past a confounded David De Gea.

Manuel Pellegrini’s side had more than earned their advantage with their attacking football, and the home side’s goal sparked Manchester United into life, with Anthony Martial placing his header wide.

Noble’s passing in midfield kept the play moving for West Ham, and the skipper looked to find Marko Arnautovic on two occasions with a ball over the top, only for the Austrian to have a chance snatched away from him at the last moment.

Romelu Lukaku had the Red Devils’ best opportunity of the first period, seeing a free header strike the outside of the near post, before Pedro Obiang’s long-range strike went over the Manchester United bar.

The West Ham front three showed a lot of promise as the first half ticked to a close and, on 43 minutes, the Irons got their just reward with a second finish. A corner found Yarmolenko, and the Ukrainian showed the maturity to wait for the best moment before striking a shot which found the net via a deflection off of Lindelof.

The finish went down as an own-goal by Manchester United’s Swedish defender. Some personal disappointment for Yarmolenko, but his efforts doubled the Hammers’ advantage as the first period ended.

West Ham began the second half with a similar flourish of attacking intent, with Noble firing a shot straight at De Gea, while Arnuatovic saw a half-volley go over the bar.

Lukasz Fabianski was then called into action, making a simply unbelievable stop to deny Marouane Fellaini. The Belgium midfielder met Ashley Young’s cross, but the Poland shot-stopper denied the effort from crossing the line.

Arnautovic then saw an incredible chance to net West Ham’s third go begging, with the away side then pulling a goal back through Marcus Rashford’s creative finish.