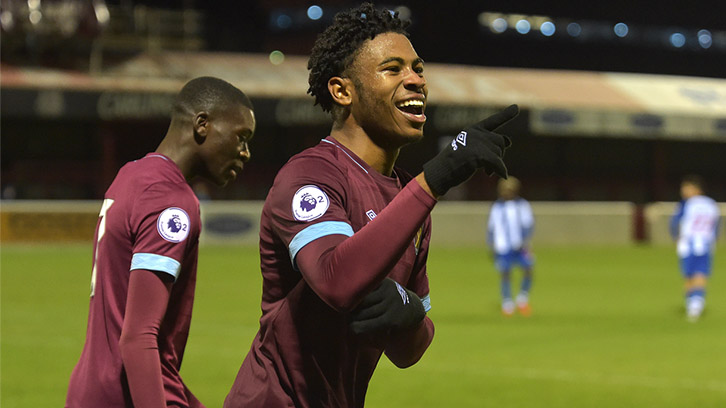 Manny Longelo had given West Ham a first half lead in the opening 2018/19 fixture in Group A for the Hammers, but the visitors – who lifted the trophy last season as well as the year before – hit back and equalised with a quarter of the match still to play.

But with the clock ticking down into the final minutes, Hector-Ingram received the ball wide out on the left before cutting in, beating three men and firing high into the roof of the net to secure maximum points for the hosts in a 2-1 win.

Wild scenes in celebration with teammates in the stands followed, and the forward – who has missed large chunks of both this and last season through injury – described the goal which will live long in the memory.

“It was a sweet moment for me,” he said with a smile. “So much time has been spent for me being in the physio room, not doing what I want to be doing, but working hard to get here, so this moment was sweet and I’ll enjoy it for quite a few days.

“To be honest, when I’d cut in from the left, at that point I just wanted to finish it and try and get the goal. I saw a lot of bodies and after I did chop the guy, I just wanted to smash it and I just kind of hoped for the best and luckily it was a nice finish and it went in.

It was a sweet moment for me. I've been working hard to get here, so this moment was sweet and I’ll enjoy it for quite a few days. 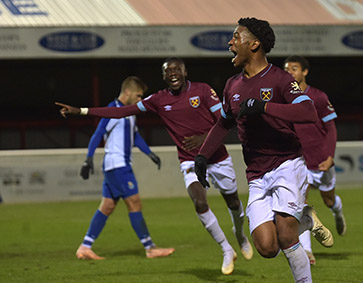 “It was a crazy moment. I didn’t really expect myself to dummy again after the second chop inside, normally I’d just shoot, but I saw it last minute and I thought I’d get more space and it worked out and went in.”

Missing plenty of football has been hard for the 19-year-old, he admitted, but the focus now is firmly on kicking-on from here and looking ahead to the Premier League 2 fixture against Derby County at Dagenham and Redbridge on Saturday.

“It’s been a bit of a head-loss for me really being injured, it’s been really hard,” he explained. “It’s not a nice time but it’s part and parcel of football and you know you just have to keep working hard and work for that opportunity.

“The lads worked really hard today so we just have to rest up and the game is done now, and we need to focus on Derby and bouncing back from the Leicester game in the league.

“For me personally, being on the left-hand-side against Porto was different; it’s a lot of hard work and a lot of running back, and I cramped up as well! But I just had to do what I had to do for the team; if the manager asks me to do that, I will to help the team.

“If that is what is asked again on Saturday, then I will do it for the team. But everyone is now focused on that game and looking forward to getting straight back into it with another match.”