Team news: Chicharito back in full training ahead of Brighton trip 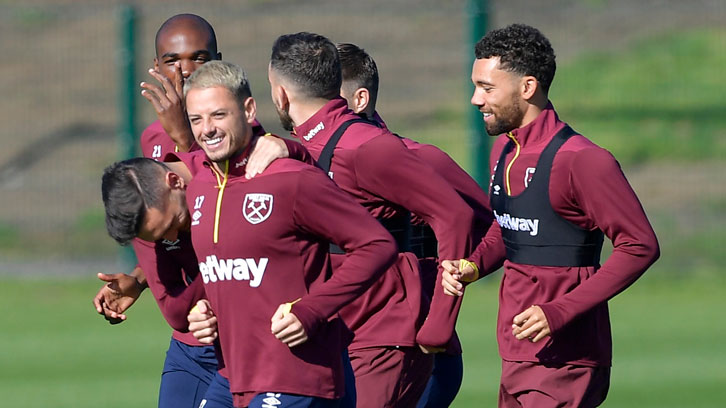 Manuel Pellegrini shared some positive team news when he spoke to the media ahead of Friday’s Premier League fixture at Brighton & Hove Albion.

The West Ham United manager revealed that Chicharito is over his bout of glandular fever and has returned to full training with the squad, while Andy Carroll is edging closer to his own return to action after recovering from ankle surgery.

And to complete a hat-trick of good news stories, Marko Arnautovic is fit and ready to lead the line at the Amex as the Hammers seek to make it three wins in four games after recent victories over Everton and Manchester United and a creditable home draw with Chelsea.

“Javier Hernandez worked this week with the whole squad,” Pellegrini confirmed. “I think he will recover already from his virus and now I think that he may need some more days to recover his best shape, but he is not having any problems with his disease.

“Andy is working a little bit more, not only in the gym but also on the pitch, so I hope we will recover him as soon as we can, but I think he needs a couple of weeks more.”

Arnautovic admitted after scoring in last Saturday’s win over Manchester United at London Stadium that the knee injury which ruled him out of the Chelsea draw was still giving him pain, but that he was willing to play through it to help the team.

Pellegrini said the Austrian would be closely monitored but that the four-goal striker had earned his admiration by putting his body on the line for the cause.

“We are keeping an eye on every situation with different players. It’s difficult for every player to be 100 per cent fit in every game. All players have some problems.

“I think the important thing with Marko is, maybe he had a little bit of pain, but he didn’t work too much and he played with a lot of intensity. That’s very important for us. Of course, I think it gives everyone more spirit for the team also [when a player plays when in pain].”

The only negative news to come from Pellegrini’s press conference was his confirmation that Carlos Sanchez will undergo surgery to repair his damaged knee in the next fortnight, with the Colombian set for a long spell of rehabilitation following his operation.

“Carlos Sanchez had a problem in his knee ligament and maybe he will need a couple of weeks until he can have the surgery he needs,” said the manager.

Long-term absentees Manuel Lanzini and Winston Reid (both knee) will be unavailable, while Jack Wilshere is still working his way back to full fitness after undergoing minor ankle surgery.