Manning: Our application against Everton was first class 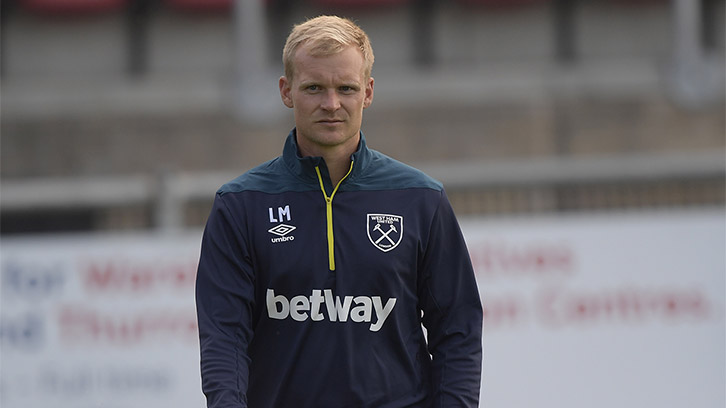 Academy coach Liam Manning praised his U23 team’s application despite a 2-1 defeat to Everton in Premier League 2 on Monday night.

The Hammers went in front on Merseyside through Veron Parkes' first U23 goal but the Toffees fought back to claim all three points at their Southport FC home base.

Despite returning to east London with nothing to show, the Hammers worked hard in the north west and were unlucky not to earn a share of the spoils.

Manning was pleased with his young team, which included six scholars from the start with two more being introduced from the bench as the night went on.

He said: “We were really pleased with how the team applied themselves. We talked about it after Exeter, the need to work hard, and tonight we had six scholars in the team, so the way we battled and how we competed was really first class.

“They have to do that every day and every game; that’s the minimum, but they definitely did that tonight. It’s disappointing for them that we haven’t got a result because from what they put in, we probably deserved more.

We were really pleased with how the team applied themselves. The way we battled and how we competed was really first class

“It was quite dry and windy first half, but it rained and the wind died down second half and that probably helped. With the young lads, it’s an element of confidence and for me, there are huge positives to come out of tonight and some really good performances.”

Manning was without the likes of Grady Diangana, Conor Coventry and Joe Powell, all of whom impressed on their first team debuts last week in the Carabao Cup against Macclesfield Town and the U23 boss reflected on what has been a good week for the Academy of Football.

“We must never lose sight of what it’s about; it’s to get one, two, three players in the team and if the manager’s pleased to have them over there, that’s a great reflection on the Academy.

“Obviously that’s had a bit of a knock-on effect on the team tonight but we have a bit of a break now and there are some lads coming back from injury, of which we’ve had a lot of.

“That will add to the competition in the team, people fighting for a place so hopefully some of those lads – Josh Pask, Vashon Neufville, Moses Makasi – will be fit sooner rather than later.”