Antonio: It's about time I scored a London Stadium goal to celebrate! 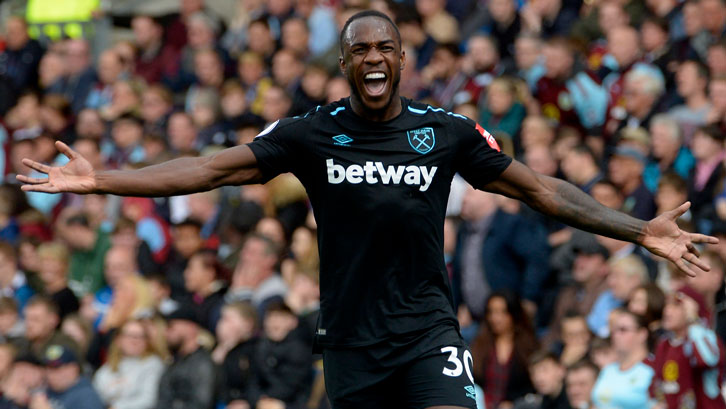 Michail Antonio hopes there will be no place like home when West Ham United host Burnley in the Premier League on Saturday.

Amazingly, after bagging ten of his first 13 goals for the Club on home turf, Antonio has not netted at London Stadium since scoring two headers against Watford in September 2016.

Exactly 18 months on, the No30 is aiming to end his 24-match run without a home goal when West Ham take on the Clarets, securing three vital points in the process.

This Saturday that curse will be broken!

“I haven’t scored at home since September 2016? Wow!” exclaimed Antonio, who has scored consolation goals in the Hammers’ recent 4-1 defeats at Liverpool and Swansea City. “I thought I was a ‘home scorer’ and scored most of my goals at home, but clearly that hasn’t been the case for quite a while.

“I’m on a little run now, though, and hopefully I can continue that by scoring at London Stadium on against Burnley on Saturday.

“I scored three at home at the start of last season, so it’s weird to hear that it’s been 18 months since I scored there. It’s crazy, in fact, but this Saturday that curse will be broken!”

Having not scored a meaningful goal since netting the opener at Burnley back in mid-October, Antonio has also not had an opportunity to expand on his repertoire of popular celebrations.

Having treated fans to the Homer, the Worm and the Carlton Banks in recent seasons, Antonio was so excited to break his duck at Turf Moor that he forgot his pre-planned routine.

Should he put his side in front against the same opposition on Saturday, the 27-year-old has vowed to put on his dancing shoes again.

“I’ve not had a chance to bring out any new celebrations, as I’d not scored for a long time, then my last two goals have come when we’ve been behind, so it definitely wasn’t the right time to be celebrating. I’d have looked stupid if I’d started dancing.

“I did score at Burnley earlier this season, which I could celebrate as it put us 1-0 up. They are going to be hard to beat, as they were that day, as they are a regimented team, but we can break them down. We have got to match their work-rate and deal with the crosses we know they are going to put into the box.

“Hopefully we can score some goals against them on Saturday, pick up some points and go from there. That would be something we can all celebrate.”