Chicharito at the double as Hammers beat Newcastle 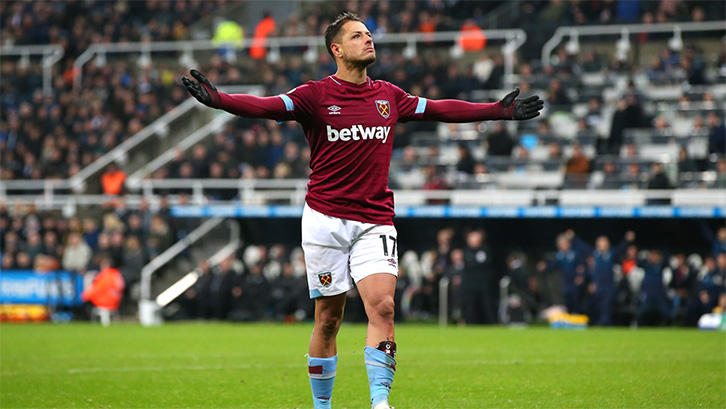 A goal in each half for Chicharito followed by a late Felipe Anderson third gave West Ham United a well-deserved 3-0 victory at Newcastle United in the Premier League on Saturday.

The Mexican’s third and fourth goals of the season and Anderson's fifth came as a result of three of the many chances the Hammers created during a wet afternoon at St. James’ Park.

Assisted first by Robert Snodgrass and then Marko Arnautovic, the visitors’ No17 was restored to the starting XI for the north east trip and did not let manager Manuel Pellegrini down as his brace gave West Ham all three points.

And Anderson rounded off a brilliant afternoon for the east Londoners with a neat finish, firing under the hosts' stopper Martin Dubravka having been set away by substitute Jack Wilshere.

The first half began in rip-roaring fashion with both teams counter attacking quickly when possession turned over. The first opportunity of real note, though, was the Hammers’ goal.

Snodgrass, playing wide on the right, cut onto his left foot and curled a beautiful ball into the six-yard-box where Chicharito was patiently waiting – all alone – to tap in and give the visitors the lead, taking his tally for the season to three.

The chances for the side in Claret and Blue did not dry up. After a quarter-of-an-hour, it could have been two when Felipe Anderson burst through the Geordies’ defence but his final pass was cut-out.

That became a theme of the Hammers’ attacks during the first 45, in fact. On 24 minutes, Arnautovic rounded goalkeeper Dubravka but was forced wide and could not get the shot away. His eventual pass looking for Anderson was intercepted and cleared.

Newcastle had their own golden chance just before the half-hour mark when a Matt Ritchie corner was headed over by an unmarked Ayoze Perez. 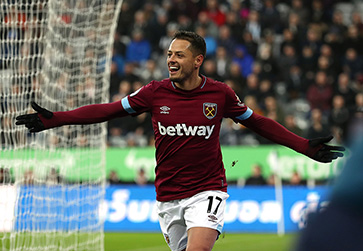 But moments later, once again Arnautovic skipped round Dubravka but could not find a teammate inside the penalty area.

Just before the break, it looked as if the Hammers’ hard work was to be undone when Ritchie chipped a clever pass over the top of Manuel Pellegrini’s side’s back-four, only for Salomon Rondon to be denied by a superb, last-ditch Pablo Zabaleta tackle.

The second half began with the Hammers creating the better openings once again. Only five minutes in, Arnautovic was released by a clever Anderson ball and his low cross was turned behind – although almost into his own net – by Federico Fernandez.

Soon after, two wonderful chances came in the space of a minute for West Ham. First, a lightening-fast break – set away by Mark Noble’s flick – saw Arnautovic square for Chicharito inside the box but the Mexican couldn’t sort his feet out to tap home.

Then, another brilliant chance arrived the No17. Slipped in by Anderson, the forward had all the time in the world, albeit at a tricky angle, to pick his spot but could only hit the side-netting.

But on 63 minutes, his moment came once again and this time he didn’t pass it up. Declan Rice hooked a clearance away and towards Arnautovic, who was on hand to flick on and through to the – just – onside Chicharito. No mistake was this time made, and a smart finish gave the Hammers and the striker a deserved second.

It could have been five or six by this point, and a third it definitely should have been moments later when Anderson raced away down the left and found himself one-on-one with Dubravka, but the Brazilian’s effort was straight at the stopper.

One or two big chances came and went for the hosts, including when sub Joselu sliced across goal with less than ten minutes remaining.

But as the hosts chased the game late on, Anderson raced away on the break having received a pass from sub Wilshere and fired under Dubravka to make it 3-0 and round-off what was a successful trip for the Hammers.