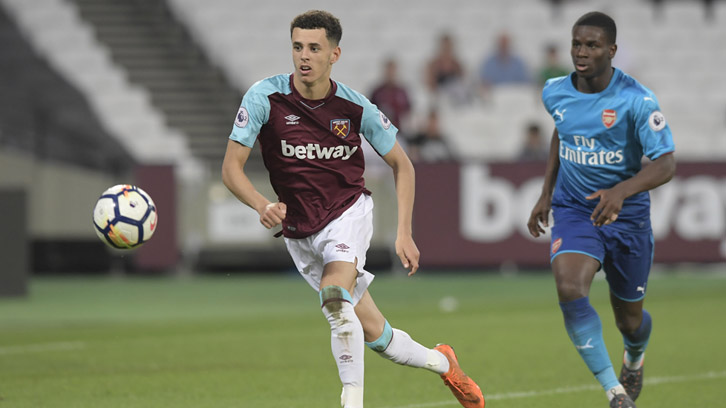 The Gunners, who claimed the three points thanks to a Reiss Nelson strike and Eddie Nketiah double before Domingos Quina scored a late consolation, looked dangerous from the outset as they went in search of silverware.

First goalscorer Nelson, who has played for Arsenal’s senior team this campaign, almost gave his side the lead six minutes in when fellow forward Nketiah flicked through for the No10 on the counter. But with Hammers goalkeeper Nathan Trott rushing off his goalline, he could only slide wide of the far post.

The hosts, finding their feet in the game, then had the chance to themselves open the scoring. First, Nathan Holland cut in off the left-hand-side but fired an effort at goalkeeper Joao Virginia, before Domingos Quina, laid-off by Marcus Browne, curled over the top.

A Sead Haksabanovic drive was deflected wide soon after, but Steve Gatting’s Arsenal did find the back of the net on 21 minutes. Tolaji Bola charged down the left flank for the visitors, crossed into Nelson who was able to control the ball, swivel and fire past Trott smartly to make it 1-0. 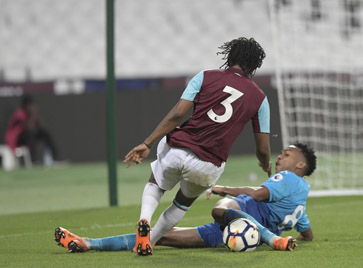 And things got worse for Terry Westley’s Hammers six minutes later. This time it was Jordi Osei-Tutu the creator, as he crossed low for Nketiah to tap home from close range.

With just five minutes to play in the half, Oladapo Afolayan – still awaiting his first West Ham goal – did draw a smart stop of of Virginia between the sticks, but it was the north Londoners who held a two-goal advantage at the break.

The hosts started the second half in much sharper fashion, and after a succession of corners and good-looking attacks, were piling on the pressure.

However, it was the champions-elect who grabbed their third and the game’s next goal. Once again, Nelson and Nketiah combined – the former, down the left, entered beautifully for Nketiah, who – like in the first half – could not miss from four yards.

With a quarter-of-an-hour left on the clock, West Ham’s best opportunity of the second half from which they did not score came when Holland found space to cross on the left, but substitute Joe Powell on the end of the ball in could not direct his header goalwards.

There was something to cheer for the 1,600-strong crowd inside London Stadium late on – Quina, with eight minutes left, played a smart one-two with Browne who delivered beautifully into the box for the Portuguese youth international to smash home with power.

And 3-1 was how the game finished, with Arsenal celebrating a title-winning campaign, and though disappointed after defeat at London Stadium, West Ham mulling over what has been a terrific first season at Division 1 level.