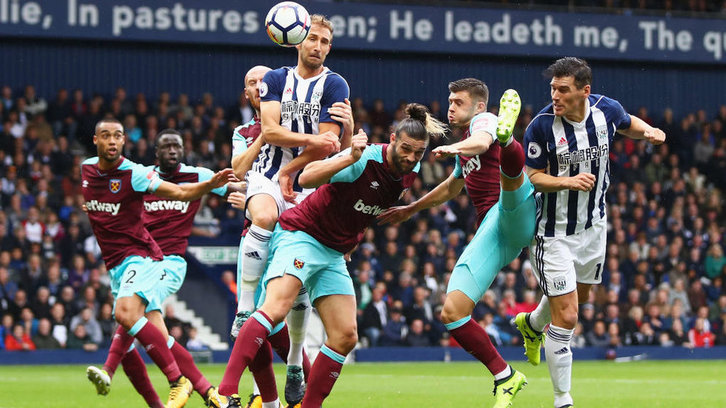 West Ham United collected their first away point of the season against West Brom on Saturday following a goalless draw at The Hawthorns.

Slaven Bilic’s side enjoyed the best chances in a physical and feisty encounter. Pedro Obiang’s shot from 40 yards, which crashed into the woodwork, was the stand-out effort.

Michail Antonio also created a decent opportunity for himself while Chicharito may have been through on goal in the second period if not for a challenge by Ben Foster, earning the shot-stopper a booking.

The Baggies meanwhile, despite some decent build-up play, failed to trouble Joe Hart’s goal with the Hammers earning a second consecutive league clean-sheet.

The best chance of the first period came from Spanish midfielder Obiang. The midfielder – who scored from distance on Monday – saw Ben Foster off his line and attempted a curling effort from 40 yards, only for the shot to smash against the cross-bar.

Antonio also fashioned an excellent opportunity for himself when he received the ball and ran the length of the pitch, before checking back and firing a shot towards goal, which Foster saved.

Andy Carroll’s power and presence allowed the No9 to chest down a couple of crosses in dangerous areas, but one of these was marshalled away while the other effort went over the bar.

The hosts meanwhile created a few opportunities without worrying Hart or the defence. Winston Reid made a brilliant tackle to stop a Chris Brunt cross from causing problems, while the winger also had a low shot comfortably saved early on.

The second half begun strongly for the Irons with Jose Fonte heading just wide after a decent corner by Aaron Cresswell.

The away side lost James Collins due to injury just before the hour mark after the Welshman went dow, which in turn led to the introduction of Mark Arnautovic, returning from his recent suspension.

Arnautovic looked lively and caused problems for West Brom, with one such moment leading to another Obiang effort from distance, only for the shot to go over the bar.

Chicharito found himself through on goal only to be brought down by Foster. The West Brom goalkeeper was given a yellow card for his high challenge outside the area, despite calls from the 2,671 travelling supporters for Foster to be given his marching orders, as Baggies defenders had also got back to cover.

West Ham's final chance for three points came in the form of another shirt from Obiang, which Foster was able to pull into his chest, giving both sides the draw.