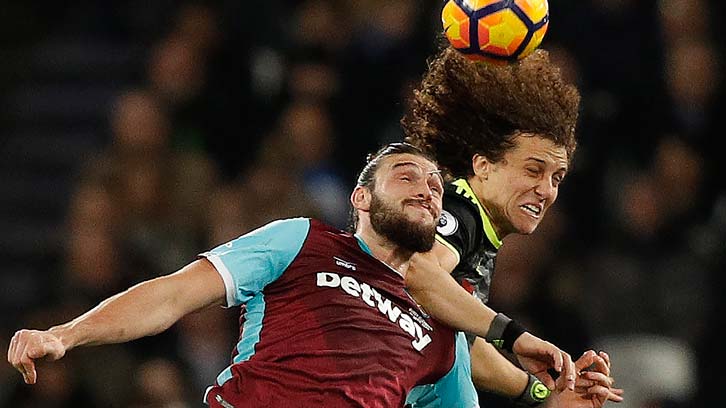 Andy Carroll believes the Hammers were not too far away from upsetting the Premier League leaders on Monday night.

Chelsea left London Stadium with a 2-1 victory which maintained their ten-point lead at the top of the table, but not before they had been given an examination by Slaven Bilic’s side.

The Hammers enjoyed a strong opening before Eden Hazard put Chelsea in front and Carroll says his team should take heart from that.

He said: “We’ve got a good team. We’re working hard and it was just mistakes that led to them going in front.

“We were playing well and had a few chances. The ball was coming into the box but we couldn’t quite get a clear-cut chance.

“Then they punished us for our mistakes, but we never gave up and scored at the end.”

For Carroll himself, the visit of the Blues was his first appearance since suffering a minor groin problem the previous month and he was delighted to come through the workout – even if he did pick up a sore head in a clash-of-heads with former West Ham loanee Victor Moses.

He added: “The ball came to the back post and I thought I was in. Vic jumped out of nowhere and I caught the back of his head. It’s not too bad and I’ll just get on with it.

“I feel good. I was obviously a bit tired at the end as I only trained three or four times in the weeks before. To get 90 minutes was great and the groin’s fine.”