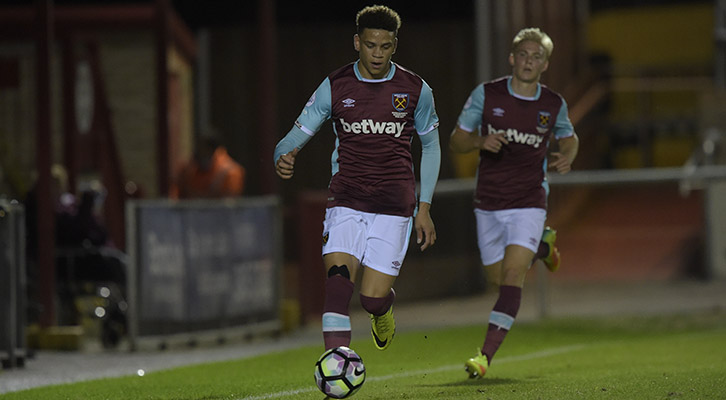 Attacking midfielder Marcus Browne has joined Sky Bet Championship side Wigan Athletic on loan until the end of the season.

The dynamic playmaker has been in great form for the U23s this season and was rewarded with a new 3-and-a-half year deal last week.

The 19-year-old now joins fellow Hammers Reece Burke and Kyle Knoyle on loan at the DW Stadium until the end of the 2016/17 season.

Browne joined West Ham at the age of eight and quickly became known as one of the brightest young prospects in the English game.

After three seasons of progression with the U18s and U21s, he made his breakthrough into the first team setup, appearing on the bench in last season’s 2-2 draw with Norwich City at Carrow Road.

Browne played a key role for the U21s during the 2015/16 season, helping the young Hammers win the Premier League Cup with a penalty shootout victory over Hull City in May.

The U23s’ playmaker has carried on in the same vain this year scoring five times and proving a real driving force in the midfield, behind top scorer Toni Martinez. Both were nominated for Premier League 2 Player of the Month in December.

Browne’s form this season has not only seen him rewarded with a new contract, but also a place on Slaven Bilic’s first team substitutes bench yet again.

Browne joins the Latics who are 23rd in the Sky Bet Championship, but only three points from safety.

Everyone at the Club would like to wish Marcus the best of luck for his loan spell.