West Ham frozen out by Manchester City in Iceland 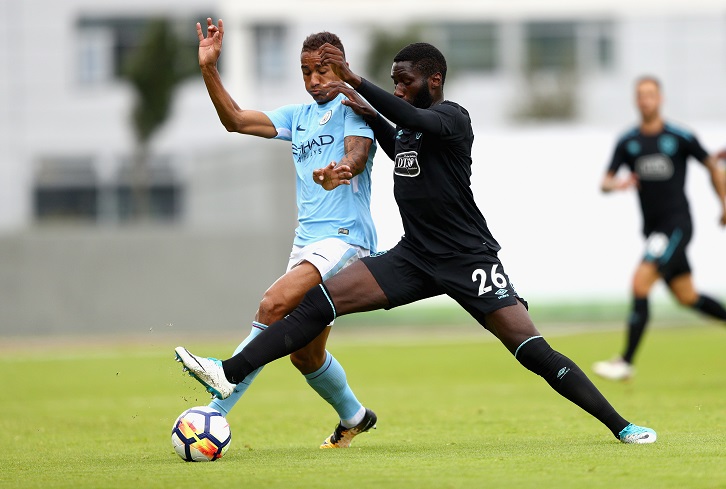 Goals from two South Americans condemned West Ham United to defeat by Manchester City in the North Atlantic in their final pre-season match.

The Hammers took on City in The Super Match, the first-ever fixture played between two Premier League clubs in Iceland, but it was the men in sky blue who lived up to the game’s name by completing a 3-0 victory.

In truth, a near full-strength City deserved their win in the home of the Viking Clap - which made an appearance in each half - with their repeated raids on West Ham territory leading to a succession of chances throughout the 90 minutes.

After an encouraging opening, West Ham were guilty of playing a part in their own downfall as Angelo Ogbonna and Arthur Masuaku got themselves in a muddle, allowing right wing-back Danilo to steal possession. The summer signing from Real Madrid passed to Kevin De Bruyne, who crossed accurately for Jesus to convert from close range.

From then on, City took the upper hand, keeping the ball for long periods, as has become their trademark under Guardiola.

In the first half alone, City loanee Joe Hart saved well from Aguero, Leroy Sane and Danilo, Vincent Kompany fired too high, while De Bruyne and Aguero were both denied by blocks.

West Ham’s first and only real chance of the opening half came on 29 minutes, when Pedro Obiang played in Pablo Zabaleta down the right and the Argentinian crossed for Toni Martinez, but the Spanish striker could not keep his header down.

After Sane had flashed a shot across the face of goal, the Hammers did threaten again momentarily three minutes before half-time, but goalkeeper Ederson rushed from his penalty area to clear before Martinez could touch the ball past him.

Bilic made three changes at the break, bringing on Sam Byram, Declan Rice and Chicharito – to loud applause – for Zabaleta, Mark Noble and Martinez, and the moves nearly paid off nine minutes into the second half.

A rapid counter attack saw Chicharito set Edimilson Fernandes away. The Swiss made his way into the City penalty area, but Ederson dived to his right to save the No21’s low shot.

Two minutes later, City erupted into life once more on the island famous for its volcanoes, exploding through the Hammers defence courtesy of David Silva’s cross and Aguero’s close-range finish.

Guardiola replaced seven players and it was one of his substitutes, Sterling, who volleyed a third past former teammate Hart with 19 minutes to go.

The England internationals were in the thick of the action again moments later, but this time the goalkeeper won the battle by keeping out the forward’s powerful downward header.

West Ham belatedly rallied, most notably when Andre Ayew won the ball from Elaquim Mangala and passed the ball into the net, only to be whistled for a foul on the Frenchman.

So, the Hammers have completed their pre-season schedule and will now prepare for the opening Premier League fixture at Manchester United on Sunday 13 August.