Draw on Wearside after late leveller 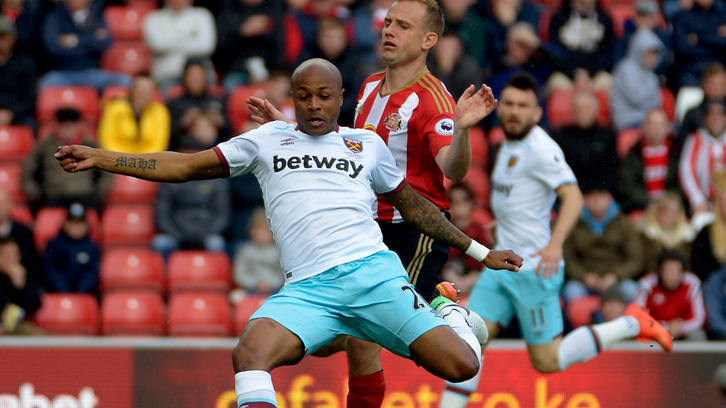 A late Fabio Borini strike earned Premier League basement club Sunderland a point in a 2-2 draw after West Ham United had been in front for so long at the Stadium of Light on Saturday.

The 90th minute equaliser spelled extreme frustration for Slaven Bilic’s side, who had previously re-taken the lead through James Collins after Andre Ayew’s opener had been cancelled out.

The Hammers went almost two months without a victory prior to last week’s triumph against Swansea, and it was so nearly two wins in two.

Things started well for the visitors, without suspended skipper Mark Noble and the injured Michail Antonio.

Less than two minutes in, Manuel Lanzini had a smart free-kick well stopped by Jordan Pickford, but there was nothing the local lad could do to save his side three minutes later.

Sam Byram’s deep cross from the right found its way, after Andy Carroll’s cut-back, to Ayew, who controlled and prodded in to open the scoring and bag his fourth goal in eight games.

And as the home supporters inside the Stadium of Light began to turn on their side, they almost went even further behind as Robert Snodgrass curled narrowly wide from the edge of the box.

But after a dominant 20-minute spell for the Hammers, the hosts awakened and started to prompt the famous Roker Roar.

On 26 minutes, the equaliser came. Khazri, often the Black Cats’ most dangerous outlet, won a corner and, going to take it himself from the left, levelled things in the north east.

Darren Randolph was left stranded behind a forceful Victor Anichebe as the Tunisian curled directly in from the set piece – 1-1.

Ayew was close to bagging a second ten minutes before the break, firing over from close range, but it was David Moyes’ side who looked to most likely.

Byram was forced to clear a dangerous attack after some pinball in the box, and Khazri rolled one into the arms of Randolph from 18 yards before the referee whistled for half time.

But another 45, another fast West Ham start; another goal. Snodgrass corner, Ginge near post flick; back in front. Just the response Bilic’s men needed after a disappointing 25 minutes previously.

The game slowly meandered towards its climax for the next 25 minutes. The next best opportunity came when Didier Ndong fired well over from just eight yards out, wasting the hosts’ best chance to grab a second equaliser.

But despite the miss, what was to come could be sensed. Borini, on for the injured Billy Jones after a lengthy stoppage, picked up Randolph’s dropped catch and struck low past goalscorer Collins to make it 2-2 in the final minute of normal time.

Ten minutes of injury time proved fruitless for West Ham, and to make things worse, Byram was shown a second yellow card and sent off late on.

As the referee signalled the end of the action, the visitors were left with just a point to show for their efforts in the north east.