Antonio – We showed our character 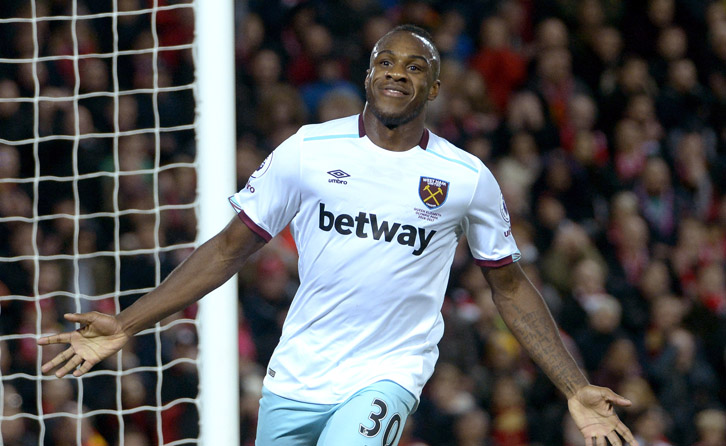 Determination, grit and character; Michail Antonio believes the Hammers showed all three qualities in abundance at Anfield as his side picked up a point in a 2-2 draw.

Top scorer Antonio grabbed West Ham’s second on Merseyside, poking past goalkeeper Loris Karius to give the visitors the lead after Dimitri Payet had beautifully cancelled out Adam Lallana’s opener with a free-kick.

After Divock Origi levelled things up again three minutes into the second period, Slaven Bilic’s side were forced to battle hard to earn their share of the spoils, something Antonio was proud of on Sunday.

He said: “We showed that we’ve got determination, grit and we showed what happens in the past doesn’t affect us and we can move on. It’s a great point away.

“We just want to keep pushing on and build on this now. We need to keep moving, building and in the week hopefully get the three points and distance ourselves from the bottom three.

“It’s a massive show of character. It shows that we can do it, it shows that we’ve got the players to do it and now we just have to do it.”

The 26-year-old’s seventh of the season – the first not with his head – came in the 39th minute as he raced clear and left Karius with no chance after Havard Nordtveit’s long ball.

And the midfielder, being deployed as the most advanced Hammer for much of the first half, showed his delight as he performed one of his much-loved celebrations.

“It was the running man celebration today,” he explained. “I was sticking with the nineties theme!

“I was thinking about heading it as I was going through! No, it had a nice bounce and I could get one with my feet. I take them as they come.

“I got one with my feet and hopefully I can keep doing it. The point is massive for us.

“It’s one of those things where we’re playing week in, week out to move forward and get further away from the situation we’re in now.”