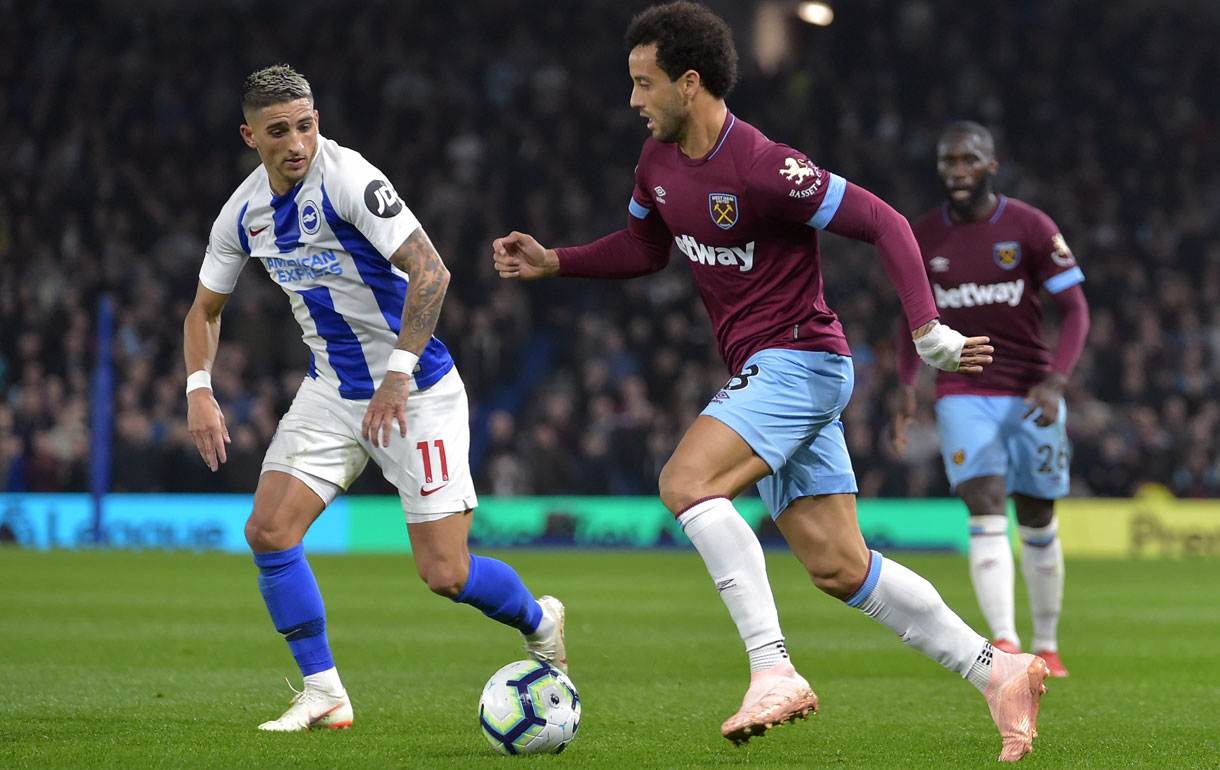 West Ham United could not find a way through a stubborn Brighton & Hove Albion side on Friday night as their four-game unbeaten run came to an end at the Amex Stadium.

Glenn Murray scored the only goal of the game 25 minutes into the contest, allowing the hosts to drop back and defend their lead – very effectively as it turned out – in the second period.

West Ham dominated territory and possession, but were just unable to make that crucial pass in the final third as Brighton stood firm at the back.

Manuel Pellegrini named an unchanged side as the Hammers looked to build on their victory against Manchester United a week ago, but it was Brighton who began on the front foot.

Their high-energy approach stopped the Hammers from getting into their stride early on and with four minutes on the block Anthony Knockaert volleyed at goal from 20 yards, but his left-footed effort was directed straight at Lukasz Fabianksi.

At the other end, a Marko Arnautovic volley looked goalbound until Shane Duffy got in way. That sparked a run of three West Ham corners, but Brighton survived that flurry and took the lead with 25 minutes on the clock.

Murray has been a regular thorn in West Ham’s side and he arrived in the box unmarked to knock home from close range after the Hammers turned the ball over cheaply in their half, allowing Beram Kayal to burst down the left and cross.

West Ham were not far away from responding six minutes later when Pablo Zabaleta found himself in space in the area. He knocked back to Arnautovic, and although he was blocked by Bruno, the ball fell to Pedro Obiang, who shot into the ground and over.

As half time approached, Alireza Jahanbakhsh fired over the top after the Hammers got drawn towards Murray, who flicked on, and Pellegrini’s men knew they needed to be sharper in the second period.

They came out firing immediately after the interval, with both Andriy Yarmolenko and Arnautovic forcing shots at goal within the first seven minutes following the restart.

With 59 minutes on the block Fabian Balbuena had a golden chance to level the scores when he wriggled free to meet a Felipe Anderson corner at the back post, only for his header to squirt wide.

West Ham had all the play and held the ball for 68 per cent of the second period, but just could not find a way through the massed ranks of the home defence as they fell to a frustrating defeat.