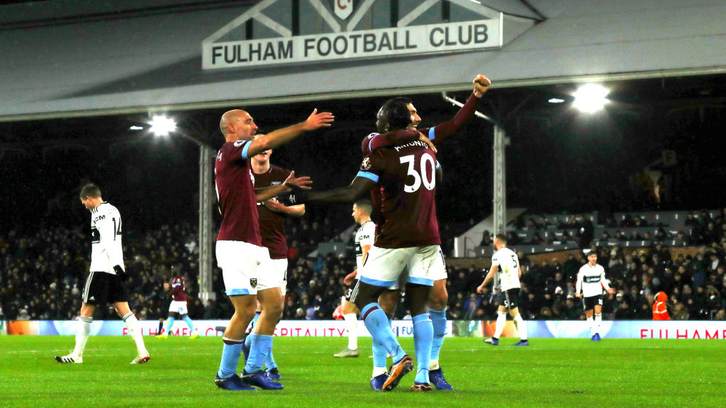 Two excellent goals in the first half from Robert Snodgrass and Michail Antonio secured a 2-0 win for West Ham United over Fulham, extending the Irons’ winning run to four league matches.

Snodgrass made it two goals in two games with a stupendous strike on 17 minutes, from the edge of the area, while Antonio tapped in after Chicharito’s incredible flicked header just before the half-hour mark.

Lukas Fabianski was required to be in top form, with Fulham pressing for a way back into the game, making a string of great saves to deny Aboubakar Kamara and Aleksandar Mitrovic.

With the win, West Ham climb to ninth in the Premier League, having won four Premier League games in a row for the first time since February 2014.

It was the home side that went close first, with Kamara played through on goal into a one-on-one position. The striker’s effort seemed destined for the corner at the near post, but the fantastic Lukasz Fabianski was down quickly to deny the Cottagers.

From West Ham’s first chance came the first goal, and what a strike it was from Snodgrass. Captain Mark Noble found Felipe Anderson with a superb pass, and the Brazilian drove into a dangerous area.

The Brazilian cut the ball back to Snodgrass, who hit his effort from the edge of the box and into the top corner.

Another chance came Fulham’s way, again through Kamara, with the striker free in the penalty area. His header, however, was well stopped by Fabianski.

On 29 minutes, the Hammers made Fulham pay with a second. Anderson’s cross was excellent, and Chicharito’s flick on was even better, allowing Antonio to slot home from close range.

The football from West Ham was mesmeric at times, with the Irons fully deserving a 2-0 advantage at the break thanks to their clinical finishing in front of goal.

As expected, Fulham were quick out of the blocks in the second period, with the home side looking to force their way back into the game.

Immediately from the restart, the Irons were under pressure, and Fabianski was required to again make a top save just seconds after the restart.

West Ham were forced to contend with pressure from Fulham throughout the second period but, although the home side enjoyed the possession,Claudio Ranieri’s men didn’t create much in the way of chances.

Indeed, Felipe Anderson looked more likely to net, with the Brazilian seeing a header blocked before Sergio Rico denied the No8 from around 10 yards.