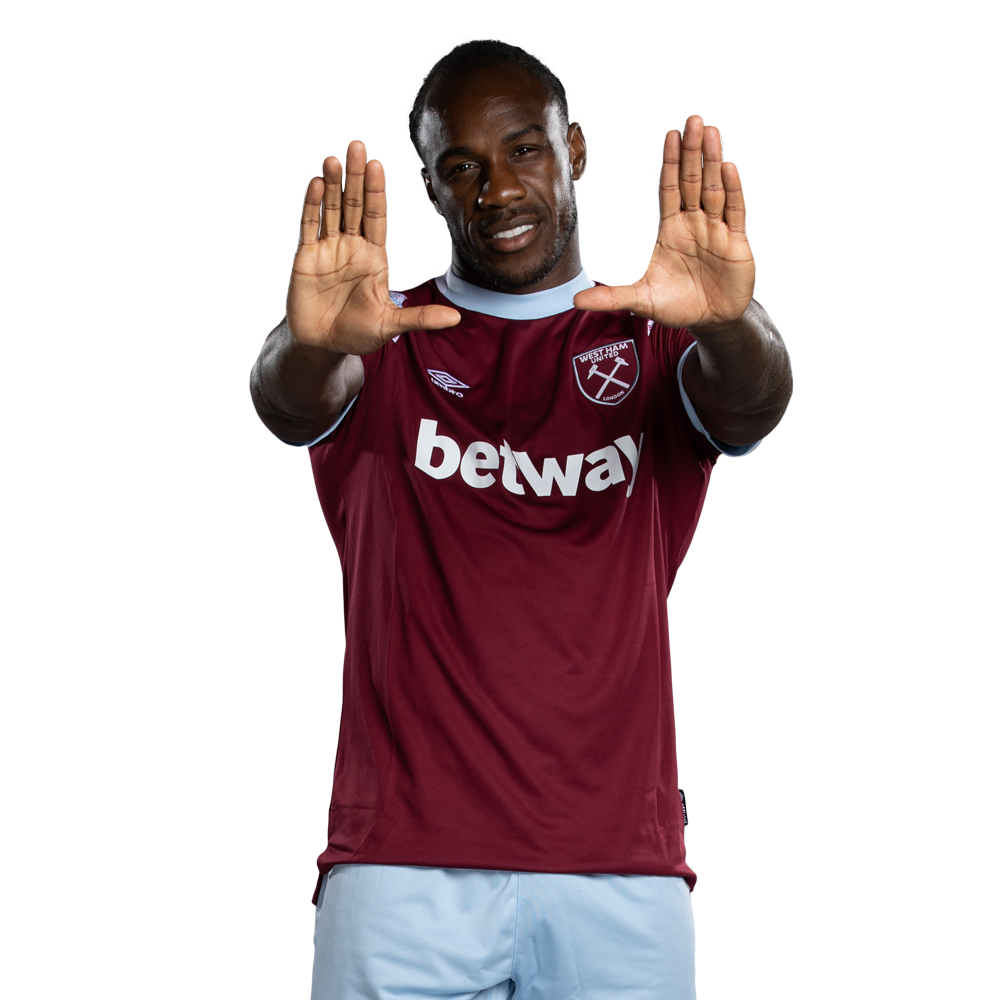 Michail Antonio has emerged as a Premier League star since joining from Championship club Nottingham Forest in September 2015.

The south Londoner has worked his way up from non-league, through the EFL and finally to the Premier League, where he has become West Ham United's all-time leading goalscorer with more than 50 to his name.

Antonio has made a huge impact in Claret and Blue, while he has also earned international recognition with Jamaica.

Made it four consecutive Premier League away games with a goal when he equalised in a 2-1 defeat at Arsenal on 19 September 2020...Matched Mike Small's 29-year-old record by scoring in five straight away top-flight matches with West Ham's opener in a 3-0 win at Leicester City on 4 October 2020...Scored his eleventh goal in 13 Premier League matches and third of the season with a spectacular overhead-kick opener in the 1-1 home draw with Manchester City on 24 October 2020....Missed eight of the next nine matches with a recurring hamstring injury...Returned to the starting XI and scoresheet with the winner against Burnley at London Stadium on 16 January 2021...Followed up with another goal in the 2-1 home win over West Bromwich Albion on 19 January 2021...Added an assist in the 3-2 win at Crystal Palace on 26 January 2021 and two for Jesse Lingard in a 3-1 win at Aston Villa on 3 February 2021...Scored in back to back Premier League matches against Tottenham Hotspur and Manchester City on 21 and 27 February 2021 respectively...Assisted for Jesse Lingard and Tomáš Souček in the 3-3 home draw with Arsenal on 21 March 2021...Returned after missing three matches with a hamstring injury to score both goals in a 2-1 Premier League win at Burnley on 3 May 2021...Made it to double figures in Premier League goals for the second consecutive season with one in a 3-1 win at West Bromwich Albion on 19 May 2021...Totaled 26 Premier League appearances, 24 of them starts, ten goals and five assists.

Scored his first goal of the Premier League season in a 3-2 home defeat by Tottenham Hotspur on 23 November 2019...Assisted Robert Snodgrass's goal in the 2-1 Premier League defeat at Crystal Palace on Boxing Day 2019...Scored one goal and made another for Sebastien Haller in the 3-1 Premier League win over Southampton at London Stadium on 29 February 2020...Scored West Ham United's opener and assisted Andriy Yarmolenko's winner in a 3-2 Premier League victory over Chelsea at London Stadium on 1 July 2020...Scored the opening goal in the 2-2 draw at Newcastle United on 5 July 2020...Netted all four goals in a 4-0 win at Norwich City on 11 July 2020, becoming the first West Ham United player to do so since Leroy Rosenior in 1988...Scored his seventh goal in five appearances in the 3-1 home win over Watford on 17 July 2020...Made it eight goals in six matches with a penalty in the 1-1 draw at Manchester United on 22 July 2020...Voted Premier League Player of the Month for July 2020.

Featured regularly in a host of different positions during the opening half of the season...Netted his first goal of 2018/19 in the 8-0 EFL Cup third round win over Macclesfield Town on 26 September 2018...Registered his first assist in the 4-2 home Premier League win over Burnley on 3 November 2018...Scored his maiden Premier League goal of the campaign in the 3-1 home win over Cardiff City on 4 December 2018...Added his second and third Premier League assists in the 2-1 win at Southampton and 2-2 home draw with Brighton & Hove Albion either side of the New Year...Assisted Andy Carroll's late header in the 2-0 FA Cup third round win over Birmingham City on 5 January 2019...Enjoyed a strong end to the season, scoring in the 2-2 Premier League draw at home to Leicester City before netting the historic first-ever opposition goal in a 1-0 win at Tottenham Hotspur's new stadium on 27 April 2019...Added an assist for Mark Noble and had a hand in two other goals as West Ham United scored a 4-1 final-day win at Watford on 12 May 2019...Totaled 38 appearances, 26 of them starts, seven goals and four assists in all competitions.

Started all four ties as West Ham United were eliminated from the UEFA Europa League at the Play-Off round stage by Astra Giurgiu of Romania...Started the first-ever match at London Stadium - a UEFA Europa League third qualifying round second leg win over NK Domzale of Slovenia...Started and scored the first-ever Premier League goal at London Stadium as AFC Bournemouth were beaten 1-0 on 21 August 2016...Added four further goals in the next three Premier League matches against Manchester City, Watford and West Bromwich Albion...Called up by England for the first time for fixtures with Slovakia and Spain, but did not play...Netted at Tottenham Hotspur, Liverpool and Swansea City either side of Christmas...Registered three assists in the 3-0 Premier League win over Crystal Palace at London Stadium on 14 January 2017...Scored his ninth and final Premier League goal of the campaign at AFC Bournemouth on 11 March 2017...Missed the final six Premier League games of the season with a hamstring injury...Totaled 37 appearances, nine goals and five assists in all competitions...Signed a new long-term contract on 11 May 2017.

Made his debut from the bench as the Hammers won 2-1 at Manchester City on 19 September...Was an unsued substitute until his return to the side from the bench in the 1-1 draw against West Brom in 29 November...Started every one of the Hammers' remaining Premier League matches...Scored his first goal in Claret and Blue in the 2-1 win over Southampton on 28 December...Followed that strike up in the next game with a goal against Liverpool...Was back on the scoresheet on 2 February against Aston Villa as the Hammers were 2-0 winners...A week later, Antonio notched once again over Liverpool in the FA Cup...Scoring consecutive winners over Sunderland and Spurs, he cemented himself as a key player in the side...Got the Hammers' comeback underway with the visitors' first in the 3-2 win over Everton at Goodison Park...With new signing Sam Byram out injured, was utilised as right-back for a number of games towards the end of the campaign...Scored an equalising header against Manchester United in the last game at the Boleyn, inspiring the Hammers to go on and win the match...Was on the scoresheet again on the final day away at Stoke City.

Antonio enjoyed a prolific start to his career as a teenager with non-league Tooting & Mitcham United, earning him a move to Reading...The Londoner spent three seasons with the Royals, totalling 33 appearances and also being loaned to League One quartet Cheltenham Town, Southampton, Colchester United and Sheffield Wednesday...At Southampton, Antonio starred under the management of former Hammers boss Alan Pardew, scoring the final goal in the Saints’ 2010 Football League Trophy final victory over Carlisle United at Wembley Stadium...Antonio’s form for the Owls during his loan spell led the Hillsborough club to take the winger to South Yorkshire in the summer of 2012. There, he excelled during two full seasons in the Championship, scoring 18 goals and chalking up 19 assists in 84 appearances...August 2014 saw Antonio move to Nottingham Forest, where he made a fantastic start to life at the City Ground, contributing three goals and three assists to be nominated for the Championship Player of the Month award within weeks of joining...At the end of an outstanding season for the Reds, Antonio had scored 15 goals and assisted on 14 more occasions, earning widespread plaudits for his exceptional play...The West Ham new boys has carried on where he left off at the start of the 2015/16 campaign, scoring four goals in five appearances in league and cup, and earning him a dream move to the Barclays Premier League.

Nottingham Forest Player of the Year
2014/15