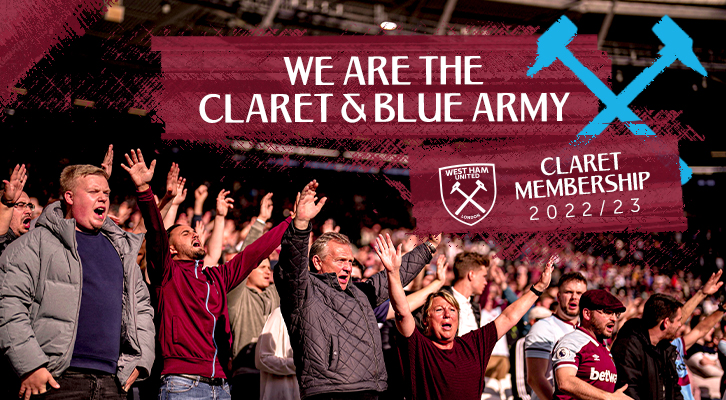 Become a Claret Member today to make sure you’re there for a thrilling 2022/23 season.

West Ham United will again be going for glory over land and sea after sealing European qualification for a second successive season and Claret Membership is the perfect way to make sure you’re at the heart of the action.

The roar of the Claret and Blue Army helped propel David Moyes’ men to a host of memorable moments last season, including victories over the likes of Liverpool and Chelsea in the Premier League and Sevilla in the UEFA Europa League, and with the capacity increasing to 62,500 for 2022/23, the atmosphere will be even more special.

With tickets in high demand, Claret Membership puts you in the best position to secure your seat at London Stadium with a Priority Window for league and cup games – alongside a £5 saving on Premier League match tickets bought in your window.

You’ll also receive an exclusive welcome gift pack alongside many other benefits, including:

So don’t delay! Become a Claret Member today now by clicking here to ensure your ticket priority for the season ahead!