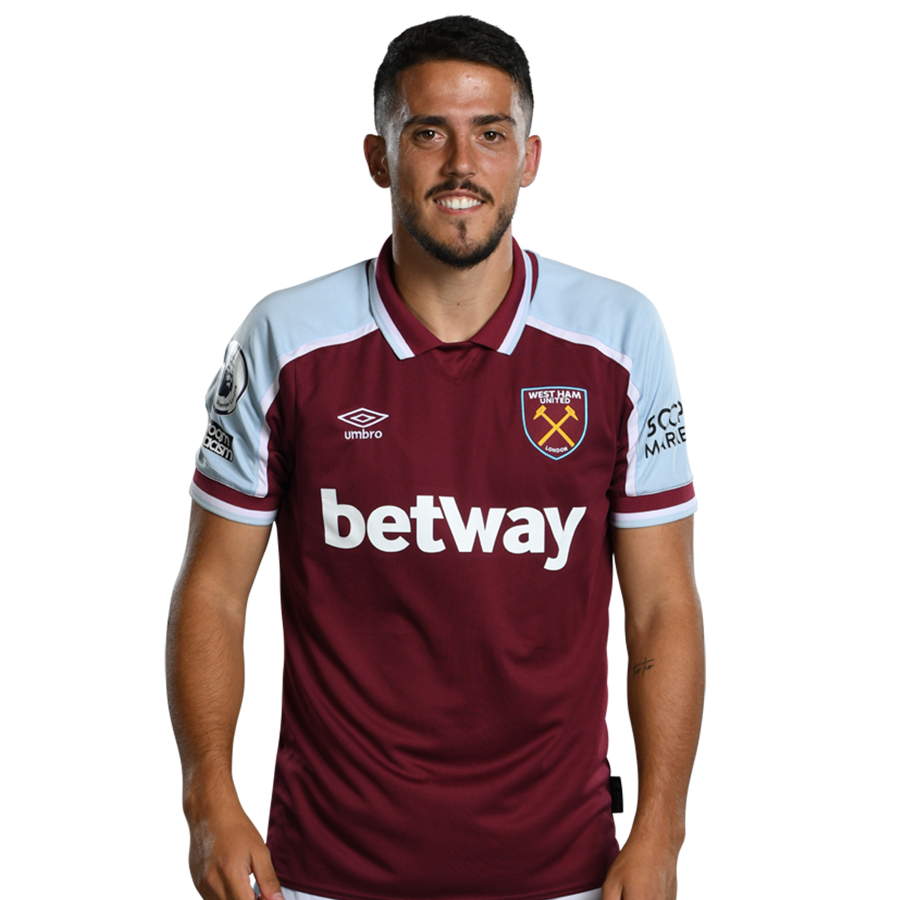 Spain international attacking midfielder Pablo Fornals linked up with the Hammers in June 2019.

A creative, technically-gifted playmaker with an eye for goal, Fornals joined the Hammers from Villarreal, for whom he excelled in both La Liga and the UEFA Europa League.

Fornals, who became the second most-expensive signing in the Club’s history, was capped by Spain for the first time at the age of 20 before helping his country win the UEFA European U21 Championship in 2019.

Scored the opener in a 4-1 Premier League home win over Leicester City on 23 August 2021...Made it back-to-back Premier League games with a goal, again opening the scoring in a 2-2 home Premier League draw with Crystal Palace on 28 August 2021...Returned to the Spain squad and assisted a goal for Pablo Sarabia within two minutes of being introduced in a 4-0 FIFA World Cup qualifying win over Georgia on 5 September 2021...Scored his first senior goal for Spain in a 2-0 FIFA World Cup qualifying win in Kosovo on 8 September 2021...Made his European debut for the Hammers in a 2-0 UEFA Europa League Group H win at Dinamo Zagreb on 16 September 2021...Appeared as a substitute in Spain's 2-1 UEFA Nations League final defeat by France in Milan on 10 October 2021...Scored West Ham United's third goal in a 4-1 Premier League win at Aston Villa on 31 October 2021...Produced a goal and assist in the 3-2 home Premier League win over Liverpool on 7 November 2021...Scored in the 3-2 home Premier League defeat by Leeds United on 16 January 2022...Assisted Declan Rice's last-minute equaliser in the FA Cup fourth-round win at Kidderminster Harriers on 5 February 2022...Scored the winning goal in the 2-1 home Premier League win over Aston Villa on 13 March 2022...Assisted two goals - one each for Craig Dawson and Jarrod Bowen - in the 3-0 UEFA Europa League quarter-final second-leg win at Olympique Lyonnais on 14 April 2022...Featured in all 12 of West Ham United's UEFA Europa League ties, starting eight...Assisted Jarrod Bowen's first goal in the 2-2 Premier League draw with Manchester City at London Stadium on 15 May 2022...Finished the season with six goals and seven assists in a team-high 54 appearances in all competitions.

Joined West Ham United from Spanish side Villarreal for an undisclosed fee on a five-year contract, with an option of a further year, on 17 June 2019...Made his West Ham United debut as a substitute in the Premier League home defeat by Manchester City on 10 August 2019...Made his first West Ham United start in the Premier League draw at Brighton & Hove Albion on 17 August 2019...Registered his maiden West Ham United goal in the 2-0 Carabao Cup second-round win at Newport County on 27 August 2019...Set up Aaron Cresswell for the Hammers' winner at Chelsea on 30 November 2019...Added further assists in the Premier League fixtures with Arsenal and Southampton in December 2019 - including for Sebastien Haller's winner at St Mary's Stadium...Scored his maiden Premier League goal in the 2-1 defeat by Leicester City at London Stadium on 28 December 2019...Made it goals in all three domestic competitions in the 2-0 Emirates FA Cup third-round victory at Gillingham on 5 January 2020...Scored West Ham's second goal in the 3-2 Premier League defeat at Liverpool on 24 February 2020...Registered two assists in a 3-1 Premier League win over Southampton at London Stadium on 29 February 2020, taking his tally to five for the season...Ended his first season in English football with three goals and five assists in 39 appearances in all competitions.

Spent time with Villarreal and Castellon as a schoolboy before joining Malaga at the age of 16 in 2012...Made his La Liga debut for Malaga at Real Madrid, aged 19, in September 2015...Quickly became a first-team regular at Villarreal, making 63 appearances across two seasons, scoring seven goals and playing his part in many more...Moved back to Villarreal in summer 2017, becoming an integral part of The Yellow Submarine’s starting eleven...Caught the eye regularly while playing for Villarreal, scoring a memorable winner in Villarreal’s first-ever La Liga victory at Real Madrid, and a stunning 50-yard strike in a win at Athletic Bilbao...Capped by Spain, first at U21 level and then by the seniors, for whom he debuted in Switzerland in May 2016, aged just 20...Added his second Spain cap in a home win over Bosnia in November 2018.