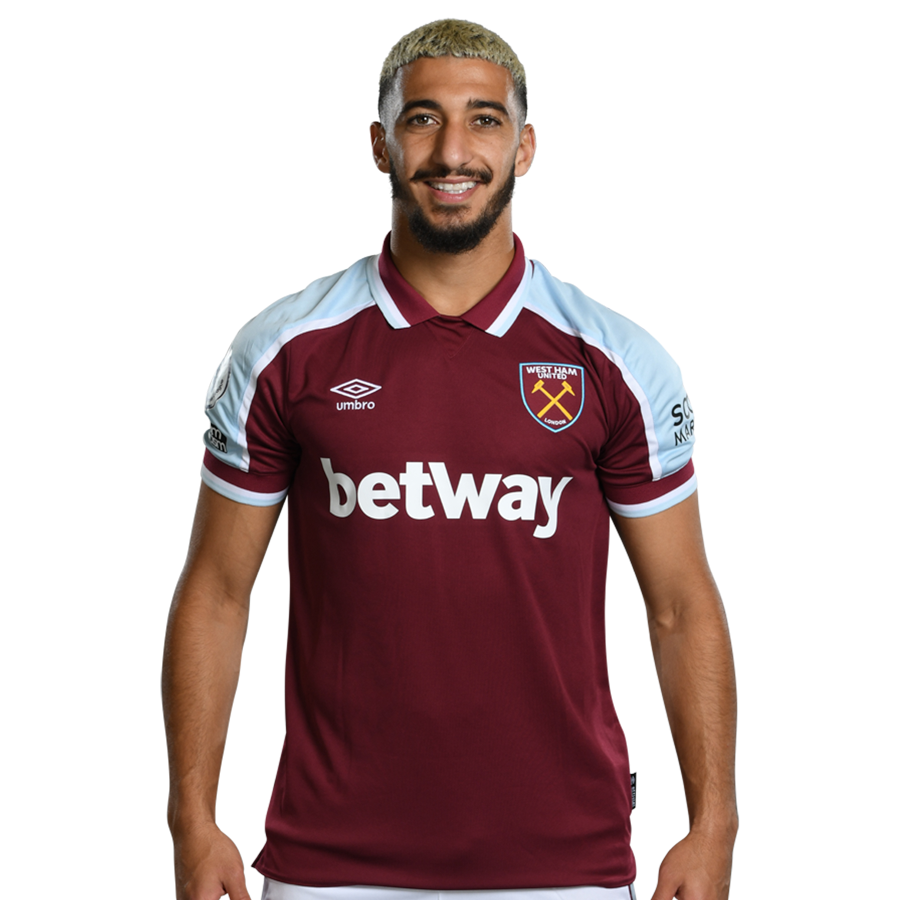 The versatile attacker joins the Hammers from EFL Championship club Brentford on an initial season-long loan deal, with an agreement to make the transfer permanent.

A unique talent capable of unlocking any defence and scoring spectacular goals, Benrahma excelled during two sensational seasons for the Bees, scoring 30 goals and assisting 27 more, having previously worn the colours of Nice, Anger, Ajaccio and Chateauroux in France.

Scored in the pre-season victories at Celtic and Brentford...Netted his second Premier League goal for the Club in the 4-2 opening-day win at Newcastle United on 15 August 2021...Made it two goals in two Premier League games when he scored the second in a 4-1 home win over Leicester City on 23 August 2021...Nominated for the Premier League Player of the Month award for August 2021...Made his European debut as a substitute in a 2-0 UEFA Europa League Group H win at Dinamo Zagreb on 16 September 2021...Opened the scoring in a 2-1 home Premier League defeat by Manchester United on 19 September 2021...Netted West Ham United's second in a UEFA Europa League Group H 2-0 home win over Rapid Vienna on 30 September 2021...Scored both goals, including a stunning individual effort, in the 2-2 UEFA Europa League Group H draw with Genk in Belgium on 4 November 2021...Scored in back-to-back Premier League games against Southampton and Watford on 26 and 28 December 2021 respectively...Formed part of Algeria's squad the 2022 CAF Africa Cup of Nations in Cameroon, where he featured against Sierra Leone and Ivory Coast as Algeria suffered a group-stage exit...Scored the Hammers' consolation goal in a 3-1 Premier League defeat at Tottenham Hotspur on 20 March 2022...Scored twice in a 4-0 Premier League win at Norwich City on 8 May 2022 before being forced off with an ankle injury...Finished the season with eleven goals and six assists in 48 appearances in all competitions.

Joined West Ham United from EFL Championship club Brentford on an initial season-long loan deal on 16 October 2020, with an agreement to make the transfer permanent....Made his West Ham United debut as a substitute at Anfield in a 2-1 Premier League defeat by Liverpool on 31 October 2020...Grabbed his first assist for the Hammers by setting up Tomas Soucek's winner at home to Fulham on 7 November 2020...Assisted for Riyad Mahrez in Algeria's 2-2 AFCON qualifying draw in Zimbabwe on 16 November 2020...Made it assists in successive Premier League appearances by setting up Jarrod Bowen's winner against Aston Villa at London Stadium on 30 November 2020...Assisted Andriy Yarmolenko's goal in a home FA Cup third-round win over Doncaster Rovers on 23 January 2021...Assisted in Premier League wins at Aston Villa and home to Sheffield United in February 2021, setting up Tomas Soucek and Ryan Fredericks respectively...Started Algeria's 5-0 AFCON qualifying win over Botswana on 29 March 2021...Assisted Michail Antonio's winner at Burnley on 3 May 2021...Scored his first Premier League goal for the Club in a 1-1 draw at Brighton & Hove Albion on 15 May 2021...Ended his first season at the Club with 33 appearances, one goal and six assists in all competitions...Appeared as a substitute in Algeria's friendly victories over Mauritania and Mali in early June 2021.

Born in the city of Aïn Témouchent in northern Algeria, close to the country’s Mediterranean Sea coast...Moved to southern France as a teenager, joining Toulouse-based Balma SC – a club that West Ham defender Issa Diop also represented as a youngster...After a season with renowned youth development club Balma and two with another Toulouse area side, US Colomiers, the young winger attracted the attention of some of France’s leading clubs, including Monaco, before opting to join OGC Nice, who had just finished fourth in Ligue 1, in the summer of 2013... Made an impact at the age of 18, as he made his debut in a Ligue 1 fixture with Toulouse in October 2013...Scored his first senior goal in April 2015 in the shape of a Ligue 1 winner against Reims...Was loaned to Angers SCO, GFC Ajaccio and LB Châteauroux to gain valuable first-team experience...Impressed with Châteauroux in 2017/18, scoring ten goals and assisting five more for the newly-promoted Ligue 2 side...Spotted by Brentford’s French scout Brendan MacFarlane, before moving to west London in summer 2018...Scored eleven goals, assisted 17 more and won Brentford's Goal of the Season award for an outstanding strike against Hull City in 2018/2019...Led Brentford to the 2020 Championship Play-Off final with 17 goals and ten assists...Kicked-off 2020/21 with two fine goals in Brentford's Carabao Cup win over the Bees’ Play-Off final conquerors Fulham...Debuted for Algeria against Senegal in 2015 and has recently returned to international action, starting a 1-0 friendly win over Nigeria and appearing as substitute in a 2-2 draw with Mexico in October 2020.