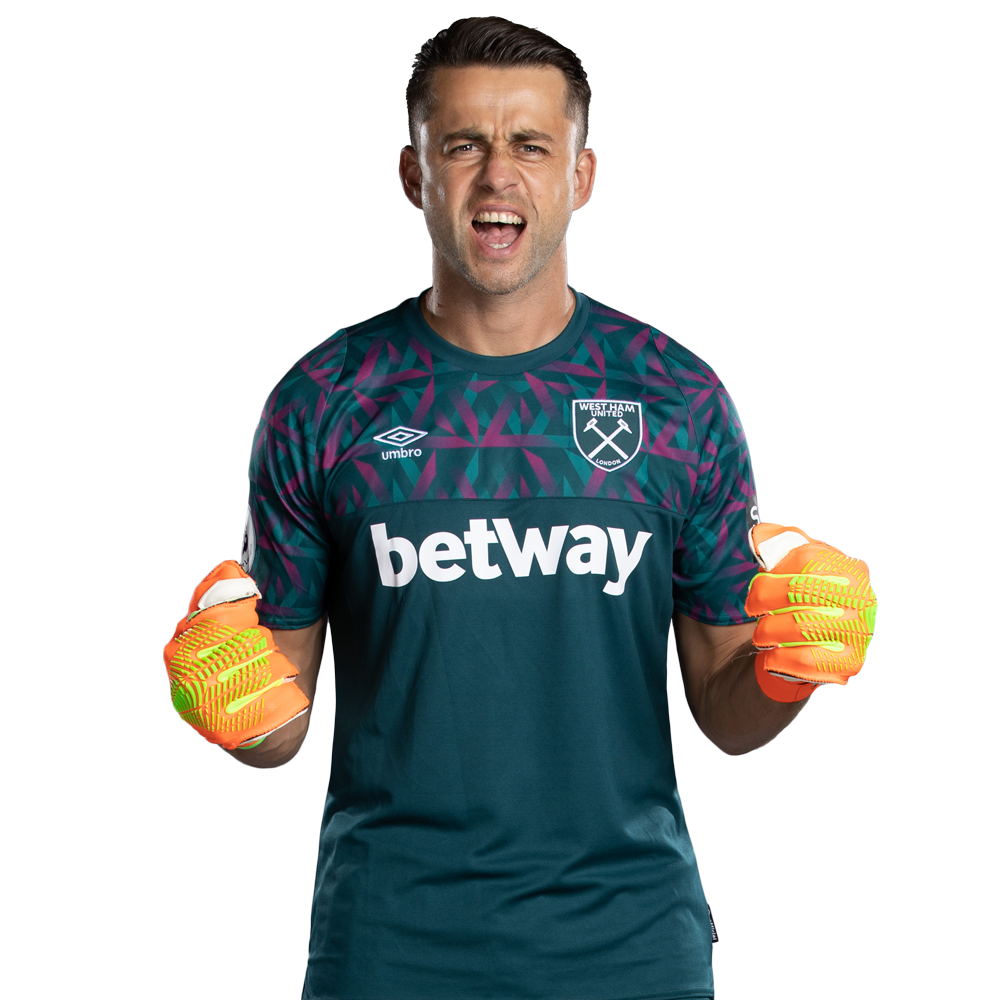 Polish goalkeeper Łukasz Fabiański joined West Ham United on a three-year contract for an undisclosed fee from Swansea City in June 2018, winning the Hammer of the Year award at the end of his first  season in east London.

Capped 57 times by his country between 2006-21, a veteran of five major international tournaments and voted Polish Footballer of the Year in 2019, Fabiański was a Polish League title winner with Legia Warsaw as a 20-year-old before moving to English football with Arsenal in 2007.

After lifting the FA Cup in his final Gunners appearance in 2014, the Kostrzyn nad Odrą-born stopper joined Swansea City, where he spent four seasons, before returning to London.

Announced his retirement from international football with Poland after 15 years, 50 caps and five major tournaments on 8 August 2021...Made his European debut for West Ham United by starting the 2-0 UEFA Europa League Group H win at Dinamo Zagreb on 16 September 2021...Included in the Poland squad for a farewell international appearance against San Marino in Warsaw on 8 October 2021....Saved a penalty from Alexandre Lacazette in the 2-0 Premier League defeat at Arsenal on 15 December 2021...Forced Maxwel Cornet to fire his spot-kick wide for Burnley in a 1-1 draw at London Stadium on 17 April 2022...Kept out his second Premier League penalty of the season on 24 April 2022, saving from Jorginho in a 1-0 defeat at Chelsea...Saved his third penalty of the season by keeping out Riyad Mahrez's late spot-kick in a 2-2 draw with Manchester City at London Stadium on 15 May 2022...Finished the season with nine clean sheets in 38 appearances in all competitions.

Saved a last-minute penalty from Ademola Lookman in a 1-0 Premier League win over Fulham at London Stadium on 7 November 2020...Started the Hammers' opening 15 Premier League matches of the season, keeping five clean sheets...Missed the 16th, a 1-0 win at Everton on New Year's Day 2021, after suffering an injury in the warm-up...Returned for the 1-0 home win over Burnley on 16 January 2021...Signed a one-year contract extension until summer 2022 on 10 March 2021...Started 35 Premier League matches, keeping ten clean sheets and conceding 44 goals...Named in Poland's squad for the delayed UEFA Euro 2020 - his fifth major tournament for his country.

Made his 50th appearance for Poland in a 4-0 UEFA Euro 2020 qualifying win over Israel on 10 June 2019...Started West Ham United's opening seven Premier League matches of the season, extending his streak of top-flight starts to 83 matches...Kept consecutive clean sheets in Premier League wins over Norwich City and Manchester United and a goalless draw at Aston Villa...Suffered a hip injury in the 2-2 Premier League draw at AFC Bournemouth on 28 September 2019...Returned to action after exactly three months out on 28 December 2019, saving a penalty from Demarai Gray in the 2-1 home Premier League defeat by Leicester City...Injured again in 1-0 defeat at Sheffield United on 10 January 2020 and missed the next two Premier League fixtures and FA Cup fourth round tie...Returned for a second time in the 2-0 home defeat by Liverpool on 29 January 2020 and started the final 15 Premier League fixtures of the season...Started 25 Premier League matches, conceded 34 goals and kept six clean sheets.

Joined West Ham United from Swansea City on 20 June 2018...Made his first appearance for West Ham United in a pre-season victory at Ipswich Town on 28 July 2018...Made his competitive Hammers debut in a 4-0 Premier League defeat at Liverpool on Sunday 12 August 2018...Started all 38 Premier League matches, keeping seven clean sheets and making more saves (148) than any other top-flight goalkeeper...Voted Hammer of the Year and Signing of the Season at the end of his first season in east London.

Born in the town of Kostrzyn nad Odrą in western Poland...Played youth football for a number of clubs before making his senior debut, aged 19, for Lech Poznan in a 4-1 Polish Cup win over Arka Gdynia in October 2004...Moved to Legia Warsaw in 2005, where he made his Ekstraklasa bow against Arka in July 2005...Kept clean sheets in each of his first three league games and recorded 19 shutouts in 30 Ekstraklasa appearances in total as Legia won the title...Arsenal spent £2million to bring Fabianski to north London in 2007...Backed-up the likes of Jens Lehmann, Manuel Almunia and compatriot Wojciech Szczesny during seven seasons in north London...Played 64 times for the Gunners, with his final appearance being the 2014 FA Cup final victory over Hull City at Wembley Stadium...Excelled between the sticks for Swansea City between 2014 and 2018, making a Premier League-high 499 saves over that period and missing just three top-flight matches...Is the Premier League's all-time Polish appearance record holder...Has been battling for the Poland No1 jersey with Szczesny and Artur Boruc for more than a decade, winning more than 45 caps...Travelled to four major tournaments, making four appearances at UEFA Euro 2016 and one at the 2018 FIFA World Cup finals.