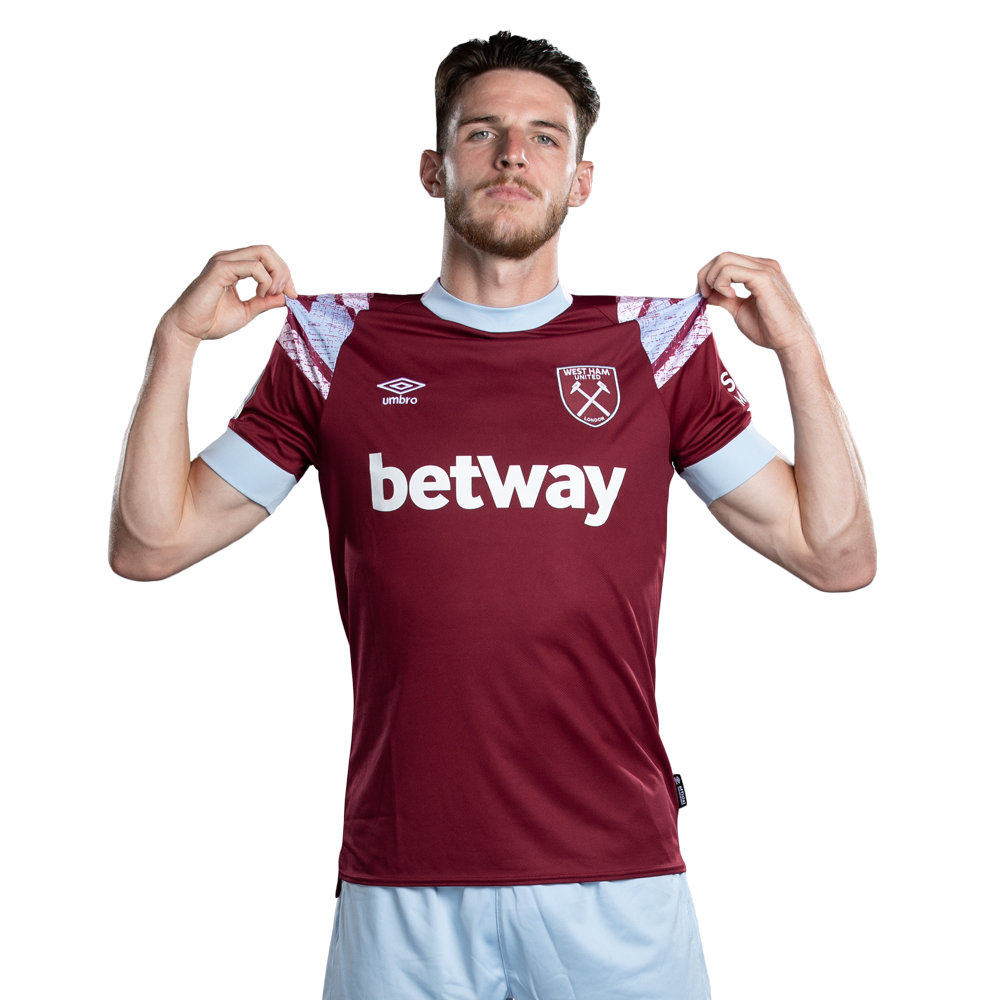 Declan Rice has become one of the standout players in the English game since breaking into the West Ham United first team at the age of 17.

Tall, strong, powerful, relentlessly driven and technically gifted, Rice has twice been voted Hammer of the Year, captained the Irons regularly and performed at a consistently high level whenever called upon.

Rice's abilities have also seen him become a regular for England at senior level, helping his country reach the final of UEFA Euro 2020.

Captained West Ham United in their opening three Premier League matches of the season, including wins at Newcastle United and home to Leicester City, as the Hammers ended the period second in the table...Became the first West Ham United player since Trevor Brooking in June 1981 to score in a qualifier for England when he netted the fourth in a 4-0 FIFA World Cup qualifying win in Hungary on 2 September 2021...Scored in each of West Ham United's opening two UEFA Europa League Group H fixtures away to Dinamo Zagreb and home to Rapid Vienna, which both ended in 2-0 victories...Scored one goal and assisted another in West Ham United's 4-1 Premier League win at Aston Villa on 31 October 2021...Grabbed an assist - his fourth of the season - for Manuel Lanzini's second goal in a 3-2 New Year's Day Premier League win at Crystal Palace...Scored a last-minute equaliser as West Ham United came from behind to win 2-1 at Kidderminster Harriers in the Emirates FA Cup fourth round on 5 February 2022...Captained West Ham United in both legs of the 2-1 UEFA Europa League round of 16 win over Sevilla in March 2022...Scored the second goal in the Hammers' 3-0 UEFA Europa League quarter-final second leg win over Olympique Lyonnais in France on 14 April 2022 - completing a 4-1 aggregate victory...Won the Hammer of the Year award for the second time on 10 May 2022...Finished the season with five goals and four assists in 50 appearances in all competitions...Started UEFA Nations League ties with Hungary, Germany and Italy in June 2022, taking his tally of senior caps to 32.

Started both of England's UEFA Nations League fixtures in September 2020 - a 1-0 win in Iceland and 0-0 draw in Denmark...Made his 100th Premier League appearance in the opening-day defeat by Newcastle United at London Stadium on 12 September 2020, becoming the 34th West Ham player to reach that landmark...Captained the Hammers regularly during the opening half of the 2020/21 season...Scored his first goal of 2020/21 from the penalty spot in a 3-0 home Premier League win over Sheffield United on 15 February 2021...Named Man of the Match in England's 2-0 FIFA World Cup qualifying win in Albania on 28 March 2021, on his 14th cap...Named Man of the Match again as England defeated Poland 2-1 at Wembley in FIFA World Cup qualifying on 31 March 2021, but also suffered a knee injury that ruled him out of West Ham United's next six Premier League matches...Returned to action in the 1-1 top-flight draw at Brighton & Hove Albion on 15 May 2021 and helped the Hammers collect seven points from their final three matches to secure sixth place, scoring in the final-day win over Southampton at London Stadium on 23 May 2021...Totaled 35 appearances, 32 of them in the Premier League, two goals and one assist...Shortlisted for the Premier League and PFA Young Player of the Year awards...Named in England's squad for the delayed UEFA Euro 2020 finals.

Started the season-opening Premier League defeat at Liverpool on 12 August 2018...Returned to the Premier League starting XI after a three-game absence in the 3-1 win at Everton on 16 September 2018...Registered his first assist for the club in the 8-0 EFL Cup win over Macclesfield Town at London Stadium on 26 September 2018...Became the first teenager since Michael Carrick in May 2001 to reach 50 first-team appearances for the Hammers when he started the Premier League meeting with Watford at London Stadium on 22 December 2018...Signed a new long-term contract until 2024 on 28 December 2018...Scored his first senior goal for West Ham United - the winner in a 1-0 Premier League victory over Arsenal at London Stadium on 12 January 2019...Netted his second senior goal when he opened the scoring in a 2-0 home Premier League win over Newcastle United on 2 March 2019...Switched international allegiance from Republic of Ireland to England in early March 2019...Received his first England call-up on 13 March 2019 for UEFA Euro 2020 qualifiers with Czech Republic and Montenegro, appearing as a substitute at Wembley in the first game before starting the second...Totaled 34 Premier League starts, leading the Hammers in tackles with 98 and ranking second in passes with 1,518.

Captained West Ham United U23s in 13 of their 22 Premier League 2 Division 2 fixtures and both play-off matches as the Hammers won promotion via a 2-1 victory at Newcastle United...Appeared twice in the Checkatrade Trophy at Coventry City and Northampton Town...Made one U18 Premier League appearance at Tottenham Hotspur in November 2016...Named on the first-team substitutes' bench for five Premier League fixtures - the first at Swansea City on Boxing Day - before making his debut as a late substitute at Burnley on 21 May 2017...Invited to train with Republic of Ireland senior squad in May 2017.