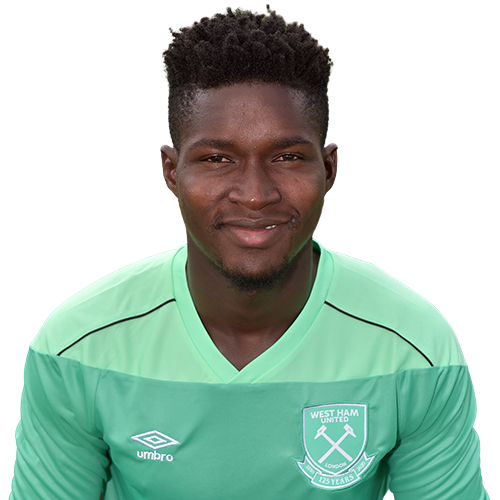 A jovial character with rapid reflexes and admirable agility, Ghana-born goalkeeper Joseph Anang is a promising prospect between the posts.

Having joined the Club as a Scholar in July 2017, Anang had to wait patiently for his debut whilst international clearance was obtained, but gained valuable experience and insight during 2017/18 when he trained regularly alongside then-first-team goalkeeper Adrian and the senior squad.

The teenager made five U18 Premier League starts during his first season in Claret and Blue, debuting with a clean sheet in a 2-0 win over Tottenham Hotspur in March 2018 having moved to England to pursue his dream of becoming a professional footballer.

Anang spent July 2018 on pre-season tour with the first-team squad, before kicking-off the 2018/19 campaign as the U18s' first-choice goalkeeper, making seven appearances for the side, and his first eight Premier League 2 appearances, debuting in September 2018. Subsequently called up for England U19s, he also then began training and traveling to first-team matches regularly with the main squad.

In 2019/20, Anang played in all but one league game for the development squad as they enjoyed an unbeaten Premier League 2 Division 2 campaign, lifting the title and clinching promotion. He also featured in his first-ever Premier League match-day squad - away at Crystal Palace on Boxing Day 2019 - and made an England U20s debut in a 3-0 win over Iceland in November.

On 28 January 2022, it was announced that Anang had signed for League of Ireland Premier Division side St Patrick's Athletic on loan until the end of November, ahead of their 2022 season.