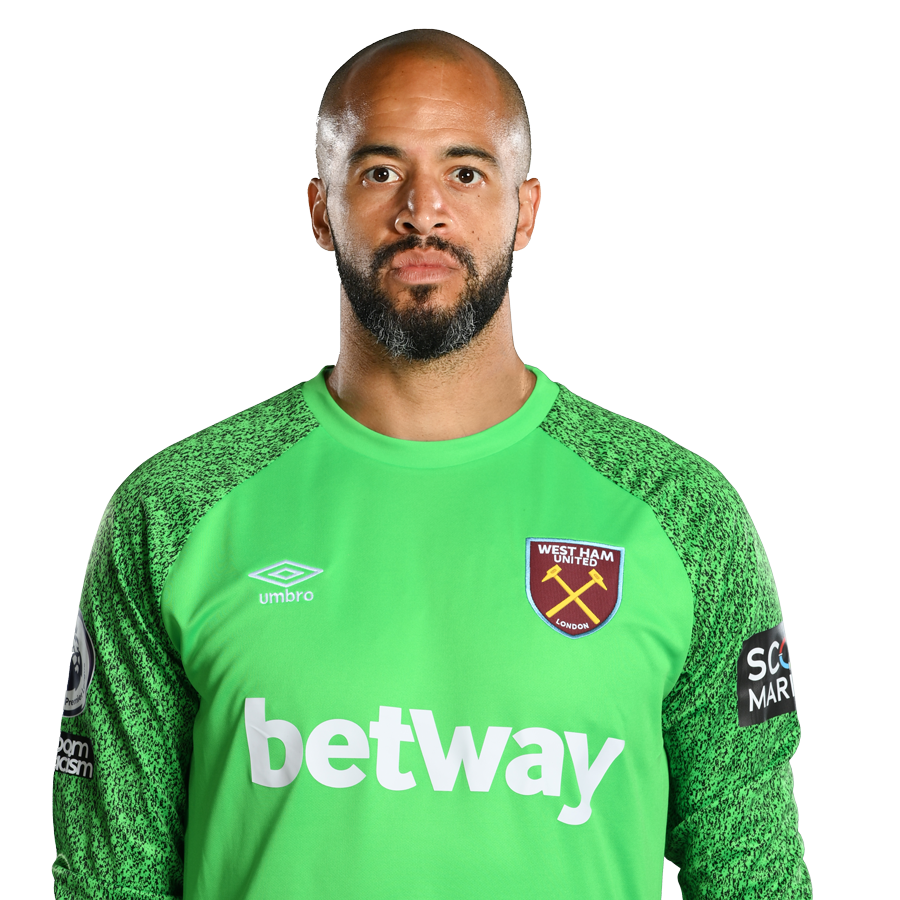 Experienced Republic of Ireland goalkeeper Darren Randolph was initially an arrival at the Boleyn Ground in summer 2015, when he joined West Ham United from Birmingham City.

A Charlton Athletic Academy graduate, Randolph debuted in the Premier League for the Addicks as long ago as 2007, before enjoying a successful spell in Scottish football with Motherwell.

A regular in the knockout competitions in his first season in east London, Randolph forced his way into the Premier League starting XI midway through the 2016/17 campaign, while he also established himself as his country's No1 during his time in Claret and Blue.

Left for Middlesbrough after the arrival of Joe Hart in the summer of 2017, but returned to east London from the north east club in January 2020.

Totaled seven appearances in all competitions, keeping a clean sheet in the 1-0 Premier League win at Everton on New Year's Day 2021...Started the 2-1 Premier League defeat at Manchester City on 27 February 2021 and 3-1 win at West Bromwich Albion on 19 May 2021...Started all three EFL Cup ties and the FA Cup third round win at Stockport County...Started Republic of Ireland's UEFA Nations League ties with Bulgaria and Finland in September 2020 and his country's UEFA Euro 2020 Play-Off defeat by Slovakia the following month...Started the UEFA Nations League ties with Wales, Finland and Bulgaria and friendly defeat by England at Wembley in autumn 2020.

Started West Ham United's first-ever fixture at London Stadium, a 3-0 UEFA Europa League third qualifying round win over Slovenian side NK Domzale on 4 August 2016...Played both legs of the Hammers' UEFA Europa League Play-Off round defeat by Romanian champions Astra Giurgiu...Featured in the Hammers' EFL Cup victories over Accrington Stanley and Chelsea at London Stadium...Picked in Premier League starting XI for the 3-2 defeat at Tottenham Hotspur on 19 November 2016, and kept his place for 22 matches...Remained Republic of Ireland No1 throughout the season, helping the Boys in Green to go unbeaten in their opening six 2018 FIFA World Cup qualifiers...Won the Save of the Season award for his fingertip stop from Jordan Henderson at Liverpool in December 2016.

Debuted for the Hammers in the 3-0 UEFA Europa League first qualifying round first leg win against Lusitans on 2 July 2015...Kept another clean sheet in the return leg a week later...Made a further European appearance as West Ham exited the competition at Astra Giurgiu on 6 August...Played for the Club for the first time in Premier League action in the 4-3 loss to AFC Bournemouth on 22 August, deputising for the suspended Adrian...Kept clean sheets in the subsequent two games of Adrian's absence - the 3-0 win at Liverpool and the 2-0 triumph against Newcastle...Replaced the injured Shay Given and assisted Shane Long's vital UEFA Euro 2016 qualifying winner for the Republic of Ireland against Germany in October 2015...Played a key role in the Hammers' run to the FA Cup quarter-finals, with outstanding performances in both matches against Liverpool...Helped the Republic of Ireland qualify for the finals of Euro 2016 via a Play-Off victory over Bosnia/Herzegovina...Played and impressed in three consecutive Premier League matches at the end of the campaign, including the unforgettable 3-2 win over Manchester United in the final game at the Boleyn Ground...Started all four matches for Republic of Ireland at UEFA Euro 2016 in France, helping the Boys in Green defeat Italy to reach the Round of 16.

Born in Bray, County Wicklow, Republic of Ireland in May 1987...Towering goalkeeper who began his career at Ardmore Rovers before joining Charlton Athletic in 2004...Loaned out to Welling United, Accrington Stanley and Gillingham to gain first-team experience...Made his senior debut for the Addicks in the final Premier League fixture of the 2006/07 season at Liverpool...Following Charlton's relegation from the top flight, was loaned out again to Bury and Hereford United...After six years in south London, joined Motherwell in July 2010...Featured regularly for Scottish Premier League club for three years, playing 131 times and reaching the 2011 Scottish Cup final...Twice voted into the PFA Scotland Team of the Year in 2012 and 2013...Moved south of the border again in summer 2013, when he joined Birmingham City...Featured 92 times for the Blues before agreeing to join West Ham United on a free transfer in May 2015...Left for Middlesbrough in summer 2017, excelling in the north east before returning to London Stadium in January 2020